- May 15, 2011
I took this flight prior to my Royal Wedding trip so I shall do a very quick mostly pictorial review here.
INTRO: Both Qantas and British Airways operate the same schedule to London and Sydney out of Bangkok, varied by 10 to 15 minutes. They cooperate on fares, lounges, check-in and pretty much everything else. However, on board the products are quite different. Personally I much prefer Qantas but for reasons unknown to me Qantas was not operating QF2 on this day, so I was booked on BA9 instead. As a result of this, the flight was pretty heavily booked.
CHECK-IN: As a oneworld emerald member I made my way to the First Class checkin counter, although most of the others had a very short queue if any at all. There was a staff member on duty in the queue area directing people to the right place. The friendly checkin girl gave me by boarding pass and took my bags and I was on my way.
After checkin I made my way to the joint Qantas/British Airways lounge. I was quite early so the inbound flight from London and transfer passengers had not yet arrived, so the lounge was pretty quiet. 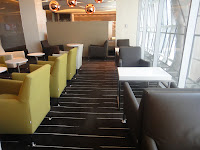 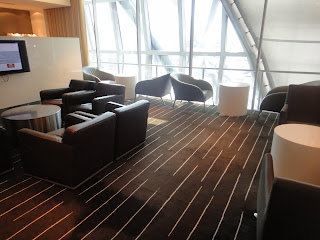 The First Class lounge is essentially the same as the business  class lounge but with a few better drink options (such as Moet), and its a smaller more intimate space. There is usually better access to shower facilities too as they are separate to the business class lounge and less likely to be occupied during the 'rush hour' when QF2 and BA9 arrive from London for a short transit en route to Sydney.

While I was in the lounge I noticed a British Airways 747 parked at a remote stand: 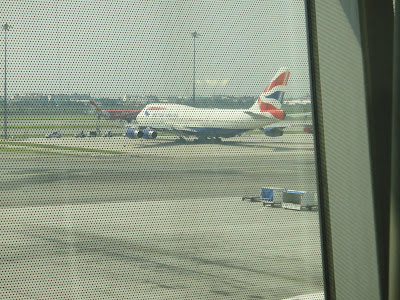 This was unusual as today's BA9 had not yet landed according to the flight status monitors. I went online to flightstats and found yesterdays flight had been cancelled in Bangkok, so it did not operate to Sydney and back. This particular aircraft would be operating that evenings BA10 back to London. I am not sure what went wrong.

While I was waiting I had a few snacks, nothing particularly exciting but they did have some nice Australian style Lamington cakes which were pretty good.
After a while boarding was announced and we all made the very long walk to the furthermost gate on the E concourse, E9. When I arrived I found G-BNLL, a 21 year old Boeing 747-400 that has been flying for British Airways since it was new. No doubt after 21 years this aircraft has covered millions of miles and seen many many places.


With quite a full flight I was hoping for an upgrade but it was not to be! Economy class exit row it was. 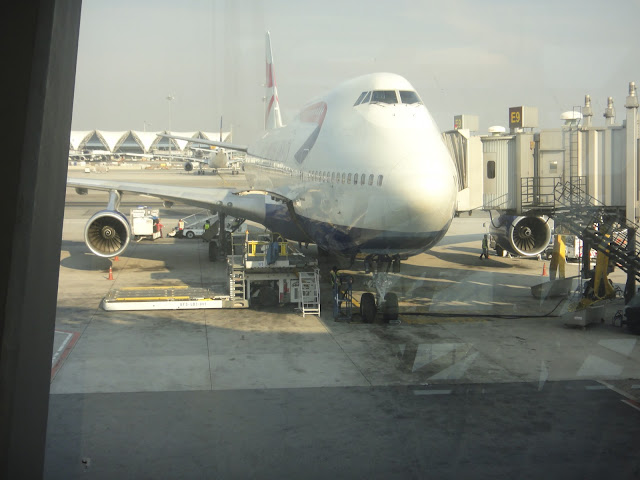 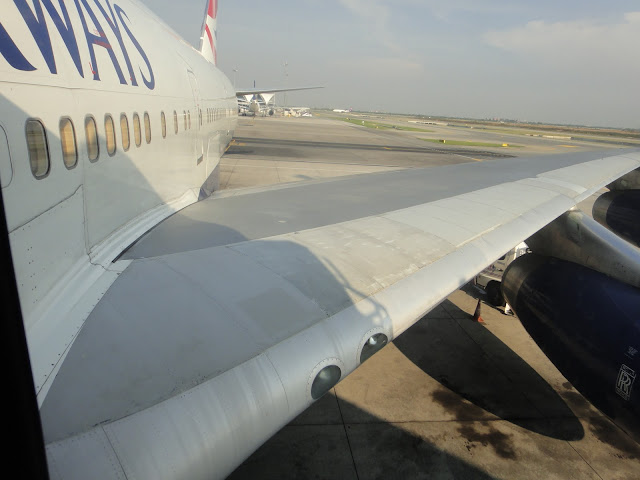 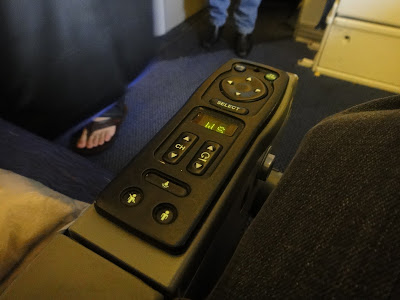 The inflight entertainment systems are pulled out from between the seats and the controls are built into the arm rests as seen in the image to the left.

During the safety briefing the crew come and pull out the bulkhead and emergency exit tv screens so people can view the briefing, then they come around and stow them again as required for takeoff. This differs to Qantas who do a manual demonstration in the aisles during the briefing for those who can not see a screen.
Before long we were pushing back in the late afternoon sun and making our way to the runway. The Rolls Royce engines soon roared and we lifted off and set course for Sydney. 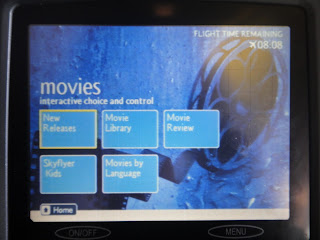 As this was my first time on a British Airways flight I took a few minutes to get familiar with the entertainment system. I liked the responsiveness of it and the flight time remaining showing on the menus. Choice was pretty good too.

The crew came around offering drinks and I took a white wine which was served in a small plastic bottle with a plastic cup. The wine was very ordinary indeed! I switched to coke for the main course.
Dinner was offered soon after and there was a choice of two. I cant even remember what it was I selected, maybe it was chicken, but I can see from the photo it came with beans and mashed potato. The cold salad with mushrooms had a Thai flavour to it but I thought was pretty uninteresting and I did not finish it. Dessert was a cake which was quite tasty.


Soon after dinner it was lights out and most passengers went off to sleep or watched movies. I finished my movie and closed my eyes and managed a bit of broken sleep, but nothing significant.

About 1 hour 30 minutes prior to landing in Sydney a cold breakfast was offered. It was very ordinary with juice, yoghurt and croissant followed by tea and coffee. In comparison, on this particular sector Thai Airways offer both a hot dinner service and a full hot breakfast service. It is actually quite hard to find an airline with more generous economy food offerings than Thai. The croissant was ordinary so I just had the yoghurt, a juice and cup of coffee.

Soon after breakfast we made our descent into Sydney and landed 2 minutes after the airport opened from the night time curfew at 6.02AM. The landing was one of the most violent I have ever experienced, from a passenger perspective (with pilot experience in my younger days). It seemed to me the pilot flared too late and as a result our rate of descent was far too high as we hit the runway. Fortunately the 747 landing gear is built to withstand these little errors of judgement and we were able to make our way to the gate without a problem, although the crew member opposite me and I did have a brief discussion with him saying 'that was NOT a good landing!'.
So ends my first ride on British Airways. The product is in the middle of the range I suppose, an improvement compared to United long haul economy but certainly not as good as Qantas, and no where near that of Thai and Singapore Airlines.