The Royal Tour Part 2 - Zurich to Edinburgh via Frankfurt. Business on Lufthansa

- May 30, 2011
After 24 hours of travel I had arrived at Zurich airport, and it was a new experience for me! First things first though, time for a shower in the Swiss lounge! On my way to the lounge I spotted this Austrian Airlines A320 in special retrojet livery:﻿ 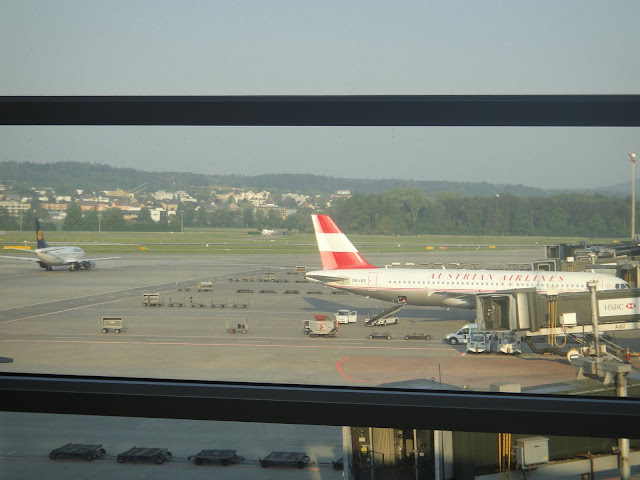 Always nice to spot special schemes, particularly ones that you would never see at your home airport. Anyway after taking a quick snap it was off to the Swiss lounge. I walked in and was given a key from the front desk for one of the shower rooms. Once you are done you hang a sign on the handle indicating that the room was used and needed cleaning and then return your key to the desk. Not very convenient since it's a bit of a walk from the desk to the bathrooms!


The shower room was basic but had everything needed and I left feeling somewhat human again. It was still early morning and there was not a lot on offer in the lounge other than fruit, croissants and biscuits. I sat down and had a cup of coffee, I was still full from breakfast on the inbound flight so I passed on the food.

For smokers there is a bar area seen on the far left of the photo above. In this area people are free to smoke, quite unusual to me as you would never see this in Australia - but I guess smoking is still fashionable in Switzerland? There is NO free internet in the lounge, you must pay if you want to use wifi. Very poor and i soon got bored and went for a wander around.

Airbus and Star alliance absolutely dominate Zurich Airport with Swiss not operating any Boeings in its fleet and A320's the short haul aircraft of choice for most european carriers. For me though, it was a now 'classic' Boeing 737-300 for my next leg to Frankfurt. Lufthansa still operates a very large fleet of these now aging 737s. According to airfleets.net they still have 63 of them, a mix of -300 series and -500 series. Having never flown on a -500 before it would be nice to cross it off the list, but today I would be on a -300. With 35 minutes before departure the inbound aircraft from Frankfurt landed and parked: 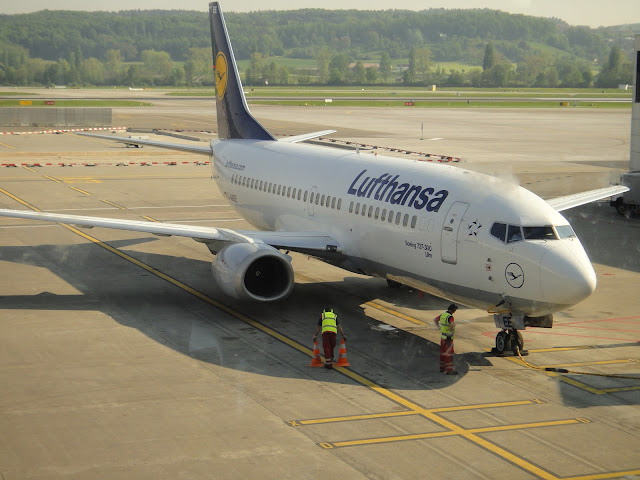 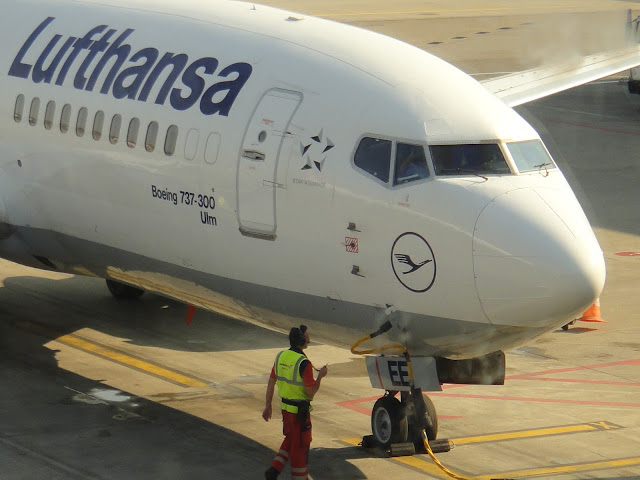 At about 09.50 Lufthansa flight 1187 was called for boarding. There was a massive rush to the gate and economy class and non status passengers were supposed to form a queue on the right, and those in business or with elite status on the left. This didn't really work well or was not understood by many passengers so quite a long queue formed in both lanes. I didn't mind waiting though. Soon enough I was on board D-ABEE, a  Boeing 737-300 delivered new to Lufthansa in 1991. It was just shy of its 20th birthday!

﻿﻿
﻿﻿
I knew business class on most European carriers was nothing special. In fact it features the same economy class seating (perhaps with slightly more leg room) but with the added comfort of a middle seat block. Some airlines also have a fold down drinks tray in the middle seat too. On this aircraft we had exactly that. The advantage to this configuration is the ability to quickly convert business class seats to economy class at short notice... the disadvantage is obvious, it is not exactly the most comfortable way to travel! At least you get a better meal and drink service.


Boarding was over pretty quickly and we were underway. If you are flying LH anytime soon, do not expect much from them in european business class. There was no welcome on board, no welcome drink and virtually no acknowledgement from the flight attendant whatsoever. I was impressed however with the captains style of taxi'ing... he absolutely powered down the taxi way at high speed barely slowing for corners and we entered the runway at half power and as soon as we lined up moved up to takeoff power. The whole taxi from gate to runway was about 90 seconds. This style of high speed agressive taxi'ing continued on the ground in Frankfurt too. They don't waste time on the ground at Lufthansa!

Flying time was announced as a very short 45 minutes on this beautiful Swiss morning. The weather was stunning and the scenery beautiful. I didn't know what to expect on a short mid morning flight like this but I was pleasantly surprised when this light meal was placed in front of me: 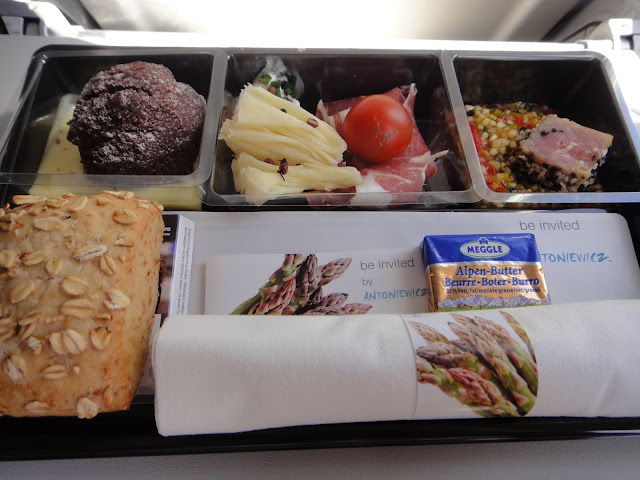 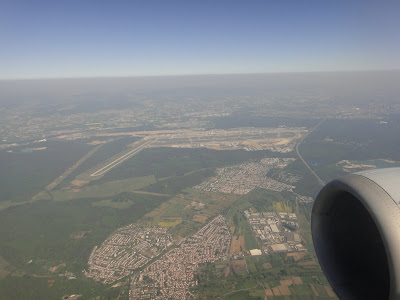 Just a plastic throwaway tray but the presentation wasn't too bad and it was quite a tasty little meal really. After the food was delivered drinks were on offer and I took a coke. By the time I was finishing my meal we were already well and truly on descent into Frankfurt.

The crew were cheerful enough during service and did offer me a refill on my coke, so that was good. We flew past the airport (as seen in pic to the left) and made a couple of right turns before a smooth touchdown. Another high speed taxi to a remote parking spot and we were soon on the bus and off to the terminal.

I had less than one hour to connect in Frankfurt so I only managed a very brief visit to one of the Lufthansa lounges near to my gate. Along the way I passed through passport control as I was leaving the SCHENGEN area and heading to the UK.


After a quick snack I packed up and headed over to the gate. As I arrived boarding was already well under way with one bus load of passengers already on the way to the aircraft which was again parked at a remote stand. There was some kind of standoff at the gate between a passenger and the gate agent with the passenger accusing the staff member of calling him stupid. I'm not sure exactly what happened but there was a bit of swearing going on from BOTH sides. The staff member was actually quite unprofessional and retaliated instead of trying to remain calm. It did seem to end pretty quickly though and the passenger was allowed on board.
﻿
﻿
FRANKFURT TO EDINBURGH


After a long bus ride past many larger aircraft including a couple of Lufthansa A380s we arrived beside Lufthansa Boeing 737-300 D-ABEO. This aircraft was slightly younger than the previous flight at 19 years old. It did have one big difference though - it had been refitted with Lufthansa extreme slimline seating. You can see just thow thin it is in the photo below... is this a plane or a suburban train?? 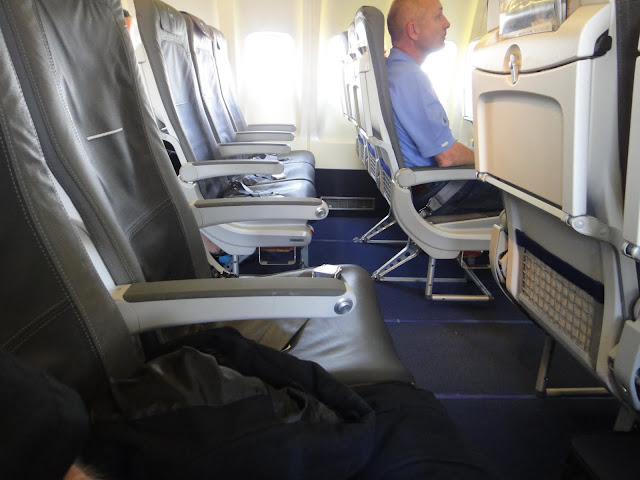 ﻿They actually call this BUSINESS CLASS. The leg room is better than on the old style seats but come on, how do they get away with this as business class? I know I'm not used to European airlines but this is pathetic. Take me back to asia where we whinge when we don't get a lie flat bed on regional flights! This newer style seating doesnt even include the centre seat drinks tray, instead the centre seat head rest just says 'your space'. Despite how uncomfortable these seats look they aren't completely awful to sit in. They don't feel like they are short of padding but  I would not want to be sitting in them for much more than about 2 hours. We were the last bus to arrive so once we were on we pushed back and made another high speed taxi to the runway, although this particular Captain was slightly less aggressive than the previous one!


This flight was slightly longer than the previous one and it was a lunch service. There were no choices and it was a basic cold meal but it was pretty tasty.  The main was a turkey salad and the dessert was a mascarpone with fruit sauce and macadamia cookie. The dessert was actually delicious and I would have liked several more! 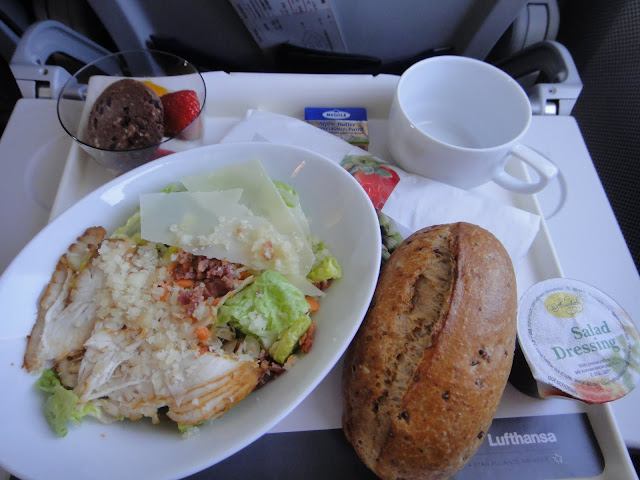 Once the meals were distributed the crew came around offering a drinks service. I had the sparkling wine (not a Champagne), and it was drinkable. The crew were actually quite attentive in offering me top ups on the wine and I had to politely decline a 4th glass as I was picking up a rental car on arrival! 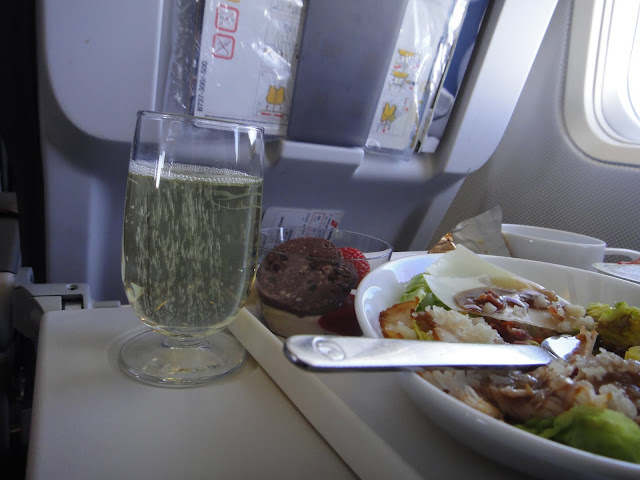 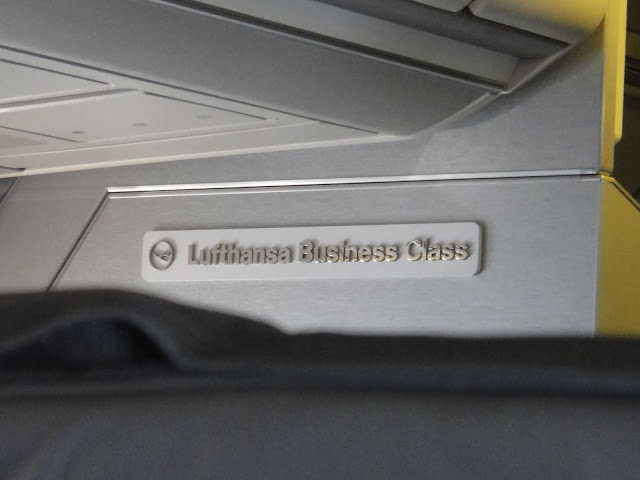 During the flight we flew over Cologne and Amsterdam airports before leaving the European mainland and crossing over to the UK. Weather was looking quite cloudy and we made our descent through several cloud layers before popping out over a very green looking Scotland. After 31 hours travel the Lufthansa crew made a smooth landing and I was here!


I bid the crew farewell and made my way down the jetway following a BMI ground crew staff member as she opened various doors leading us down the passageway to international arrivals and immigration. There was only ONE officer processing non-EU passports and it was about a 30 minute wait by the time I got there. I wasn't too impressed but what can you do??
Eventually I cleared immigration grabbed my bags and made my way over to Avis to pick up the car! There was just 4 more sleeps until the Royal Wedding of the century! But before that, there is so many palaces and castles to explore!! Next up is my Scottish visit... stay tuned