The Royal Tour Part 3 - Castles and Palaces in Scotland

- June 03, 2011
Well what visit to Scotland is complete without a visit to at least one castle? Especially if you are on a Royal Tour! My trip took me to the Palace of Holyroodhouse, Royal Yacht Britannia, Edinburgh Castle, Craigmillar Castle, Glamis Castle and Balmoral. All have associations with royalty either past or present.
First on the stops was the Palace of Holyroodhouse. This castle is used every year by Her Majesty Queen Elizabeth II for a period of one week. At other times of the year HRH Prince Charles and other members of the Royal Family use the palace. It plays host to many functions but on the day I visited it was open to the public and quite a large number of rooms can be explored along with the gardens. No pictures are allowed inside.

After leaving Holyroodhouse Palace I saw a sign pointing to Craigmillar Castle which is a ruined medieval castle dating back to the 14th century. It was deserted on the day I visited with just 2 other visitors present while I was there. It was a litte spooky wandering around inside as I disturbed several pigeons who broke the silence with their wings flapping and giving me a bit of a fright! The castle has some associations with Mary Queen of Scots, who apparently visited on several occasions. There is a great view towards Edinburgh from the top levels.
﻿
﻿

The next palace was of the floating variety.... the Royal Yacht Britannia. What a feeling as I stepped on board the same vessell that The Queen had spent so much time on travelling the earth and visiting so many amazing places.
Almost all parts of the ship are open to be explored and there is also a restaurant/cafe on board along with a fudge store selling home made fudge. I highly recommend all visitors to Edinburgh visit this fabulous ship.
﻿﻿﻿﻿﻿﻿

Next up the Edinburgh Castle, perched on the top of a rocky cliff. What a great location to build a castle: 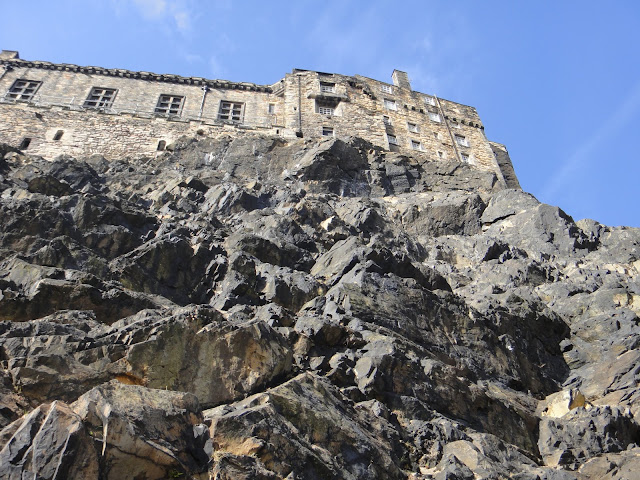 My initial planning on this trip had me flying into Aberdeen so that I may visit Balmoral Castle. It is about a 50 mile drive from Aberdeen and I was considering going on an escorted tour. Upon a little further investigation I decided that the drive from Edinburgh if I hired a car would be a much more enjoyable way to see it. So, on one of my days in Edinburgh I left at 7.30am and headed north, through the Cairngorms National Park and eventually finding my way to Balmoral. 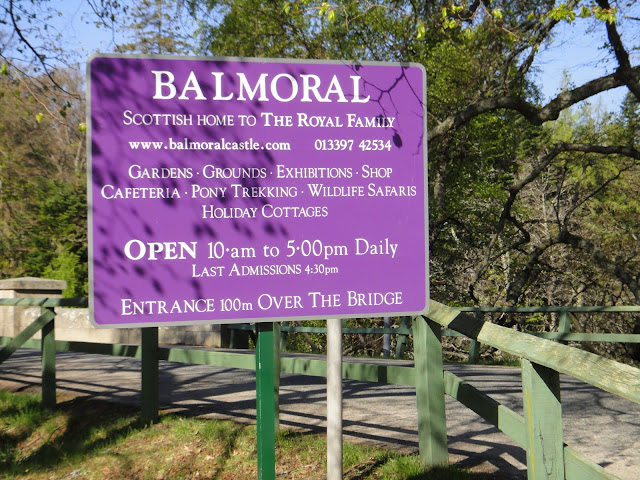 It was just after I took the above photo when I had my first brush with royalty. I was making my way across the single lane bridge you can see in the background when I saw 2 vehicles approaching, 1 sedan and one landrover following. I initially didn't think anything of it as I moved off to the side of the road to let them by. As I did that I glanced into the drivers seat of the sedan and who should be sitting there driving but none other than His Royal Highness The Prince Of Wales. I had no idea he would be up here with just 2 days to go to the big wedding... in fact I wondered if my eyes had played tricks on me? But the man at the ticket counter confirmed it was indeed Prince Charles who had passed my by just now, and apparently he would be flying to London the following morning... exactly as I would be doing!

The grounds around Balmoral Castle which was partly designed by Queen Victorias consort Prince Albert, are simply stunning. No wonder the Royal Family value their time here so much. What a great place to get out of the public eye and relax. Absolutely gorgeous! There is a great audio tour taking you around the grounds and into the ballroom, but the rest of the castle is the private property of The Queen and you can not go inside. There is plenty else to see, and quite a nice little cafe where I purchased a delicious chicken sandwich.


After a very enjoyable couple of hours at Balmoral it was time to move on, and a friend had recommended I check out Glamis Castle in Angus, Scotland. It was just about 1.5 hours drive from Balmoral through some absolutely gorgeous countryside. The weather was stunning and the drive was a real pleasure down some tiny little country roads, I managed to use Google maps driving navigation on my phone to get me all the way to Glamis.
Glamis Castle is the home to the Earl of Strathmore and Kinghorne and has been for many hundreds of years. The castle has a very special link to the Monarch, Queen Elizabeth the Queen Mother grew up here. She was the daughter of the earl and married the Duke of York who later became King George VI. The King and his family spent quite a bit of holiday time here in the castle and in fact Princess Margaret was born here. To see inside the castle you must take the guided tour. This is still a castle that is in daily use by the earl and his family and only select parts area available for viewing by the public. It was a great tour though, and you even hear a few ghost stories... apparently it is one of the most haunted places in the UK!
﻿
﻿ After my tour I stopped by the gift shop and grabbed a couple of souvenirs before setting off on my journey back to Edinburgh. My time in Scotland was almost over, I would be flying to Heathrow the following morning courtesy of British Airways. Stay tuned for part 4 covering that flight and my arrival in London.