- June 27, 2011
As a fan of the bmi Diamond Club frequent flyer program and gold member with them, it was quite important to me to fly on the airline whilst I was in London. So I booked an overnight trip to Berlin and back to sample   bmi British Midland short haul international business class. 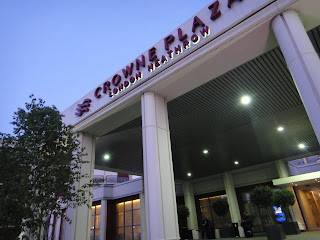 With such an early departure I decided it made sense to stay at one of the many airport hotels so I got a room at the Crowne Plaza at a reasonable price. I ended up taking the Heathrow Express to Heathrow and then transferring onto one of the Hotel Hoppa buses to the hotel. In fact I was quite pleased with Crowne Plaza, the rooms were large and although the hotel looked pretty ordinary on the outside I found it quite comfortable.

At 5am I woke up and had a quick shower before grabbing the 5.30am bus back to Terminal 1.


Arriving at Terminal 1 I made my way over to the bmi Premium Check-in area. It was pretty quiet and there was no queue fortunately. I was greeted by the staff and offered both the boarding pass for the outbound flight as well as for the return flight the following morning. That was handy, saving me a few minutes in Berlin the next day. 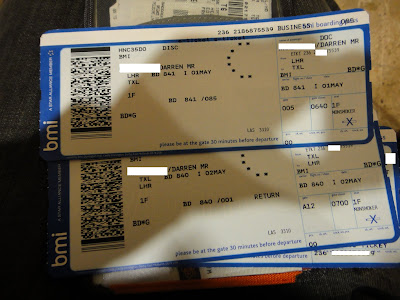 With boarding passes in hand I made my way through security and on to The Great British Lounge, the bmi flagship international lounge. I had heard plenty about it on the bmi forums on Flyertalk but this was my first ever visit in person. The lounge attendants were cold and unfriendly, checking my boarding pass but barely even acknowledging me otherwise. Thankfully though the lounge itself was quite pleasant and various cold breakfast items were on offer. 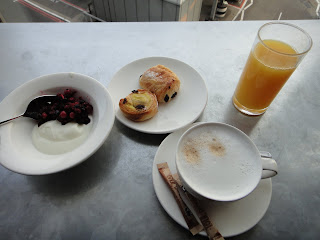 I helped myself to some pastries, fruit with yoghurt, coffee and juice. Then I found a nice window seat to relax for the 30 or 40 minutes I had spare.

There was a nice view of one of the runways, and parked in front of me was the aircraft operating todays service to Berlin: G-DBCG. This aircraft is an Airbus A319 which was delivered new to bmi a little over 5 years earlier. While I was sitting their the crew arrived and boarded via the rear stairs.

I'm not sure if they made a boarding announcement because I left a little earlier and made my way to gate 5A finding boarding had already commenced. I joined the queue and was soon sitting in seat 1F.

I had very little expectation of the seats but I did expect the middle seat would have a pull down tray providing the appearance of more space, but it did not even have that. In fact the aircraft did not even have a curtain separating business and economy. So, with the exception of increased legroom at the bulkhead, the seating was identical to economy class.

The only other seat occupied in row 1 was seat 1 A. The business area was about half full I suppose - if you factor in the middle seat always being left vacant. There was very little said by the flight attendants prior to departure although newspapers were offered.

We pushed back from the gate on schedule and there was no delay at the runway - we were soon in the air and tracking towards Germany. About 20 to 25 minutes after takeoff I was presented with a meal tray containing breakfast. There was no choice.

The tray presentation was quite nice with a black cloth underneath and proper ceramic plate. The food was egg with mushroom, tomato and some kind of potato hash brown thing. It was accompanied by a strawberry yoghurt, pastry, bread roll with jam and a drinks service. I asked for champagne - there was none. I settled for orange juice. The food was nothing special but I wasn't that hungry after snacking in the lounge anyway.

The tray was taken once I had finished and that completed the inflight service. No further drinks were offered and there was zero inflight entertainment other than reading the airline magazine. On the plus side the flight was smooth and weather was good and we were on schedule. The descent and landing were pretty standard and there was a few minutes waiting for the jetway to be vacated before we parked. By the time we shut down we were 6 minutes behind schedule but the short walk times from gate to immigration to roadside at Tegel more than make up for that! I was astounded to find it is about a 30 metre walk from the end of the jetway to the road outside. Very efficient.

Overall the flight experience was generally positive although the catering could be improved and the seating was very ordinary for business class - as a minimum I at least expect a 'convertible' type seat with pull down tray in the middle seat.

Next up a few pics around Berlin and the return to London.