As part of my journey home from the Royal Wedding I flew Qantas from Bangkok to Sydney in business class. I was lucky to also have an emergency exit seat on the upper deck. The flight was ready to go at the scheduled departure time although we did hold at the gate for a while to ensure we would arrive after curfew time in Sydney the following morning.


The Boeing 747-400 business class seats are skybeds but they are angled and not completely lie flat like the newer version found on the Qantas A380's. They are comfortable nevertheless. Inflight entertainment is available by pullout screens as is usual in exit rows. 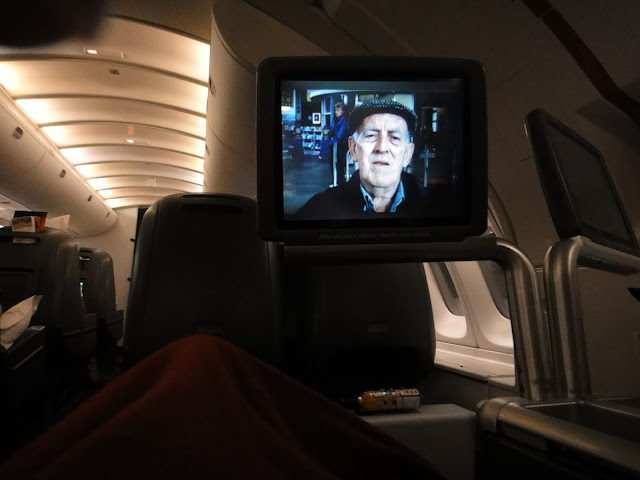 QF2 offers a full hot dinner service after takeoff and a continental breakfast in the morning. The breakfast is ordered in a very similar way to a hotel in room breakfast with a form given to each passenger to fill in, selecting which breakfast items you want. You then give this to the crew who keep it for the morning and wake you up for your chosen breakfast at the right time. Alternatively you can ask for an express breakfast just before landing, or to not be woken up at all.


The main course was presented on a proper plate which had been neatly arranged and looked quite nice. The taste was actually very good and the asparagus was a highlight. I wish Thai Airways presented it's business mains like this instead of the casserole dishes they use.

After dinner trays were removed and crew came around offering fruit OR dessert. They seemed to ask for your choice rather than offer both, but I just said I'll have both and it was no problem:

With dinner done I headed off to sleep and managed a few hours before it was time for breakfast. I had muesli, croissant, muffin, breakfast shake and coffee: 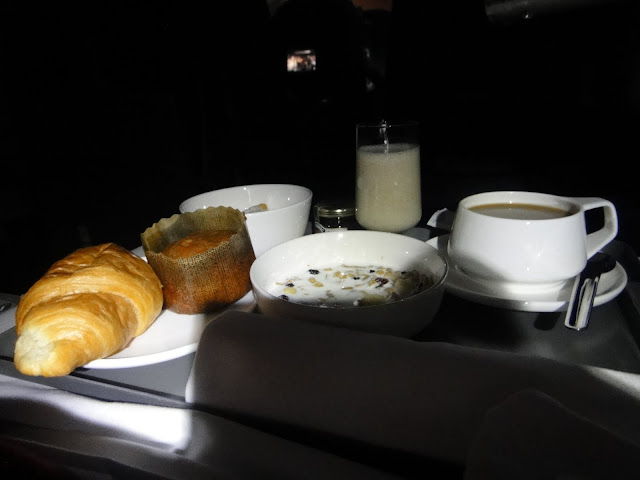 Although there was no hot breakfast I was quite content with this offering. Breakfast was cleared away and we commenced our descent into Sydney. The captain came on to announce there would be a short hold just west of Newcastle due to Air Traffic Control restrictions.
We made a routine landing on runway 16R at Sydney and taxi'ed to the gate. I was back home in Australia, since I left I had seen so much and been a part of history in the crowds outside Buckingham Palace for one of the biggest royal weddings of my lifetime. I had an absolutely marvellous time and can't wait to return to the UK.