- February 26, 2014
Here is a quick report on QF790, the daily service between Sydney and Alice Springs. This is a Boeing 737-800 sector and on the  flight I took in January I was lucky to score one of Qantas' newer models with Boeing Sky Interior. It was VH-XZF, just 8 months old at the time of this flight.

Here is the business cabin featuring leather seats and audio video on demand in all seats: 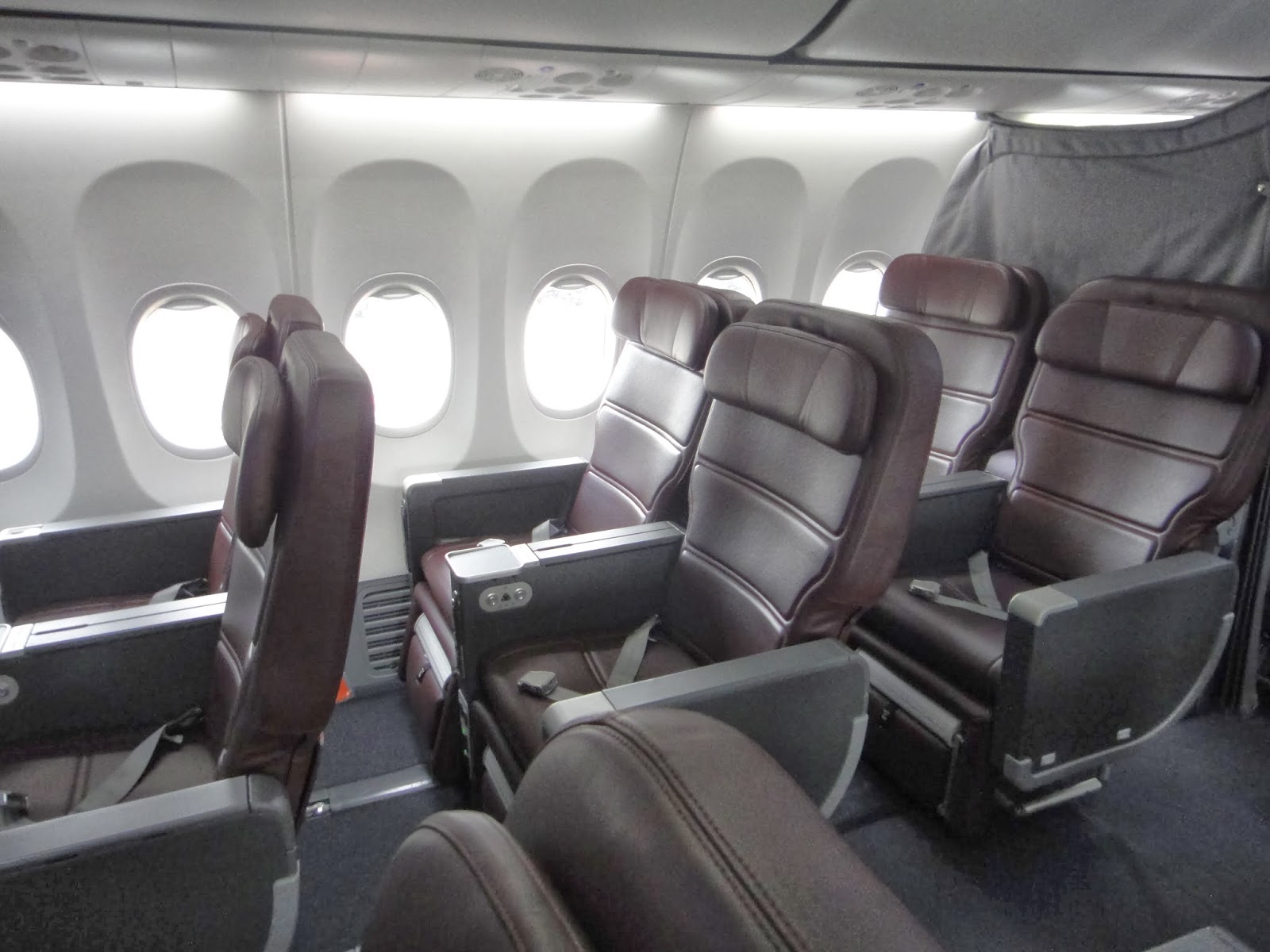 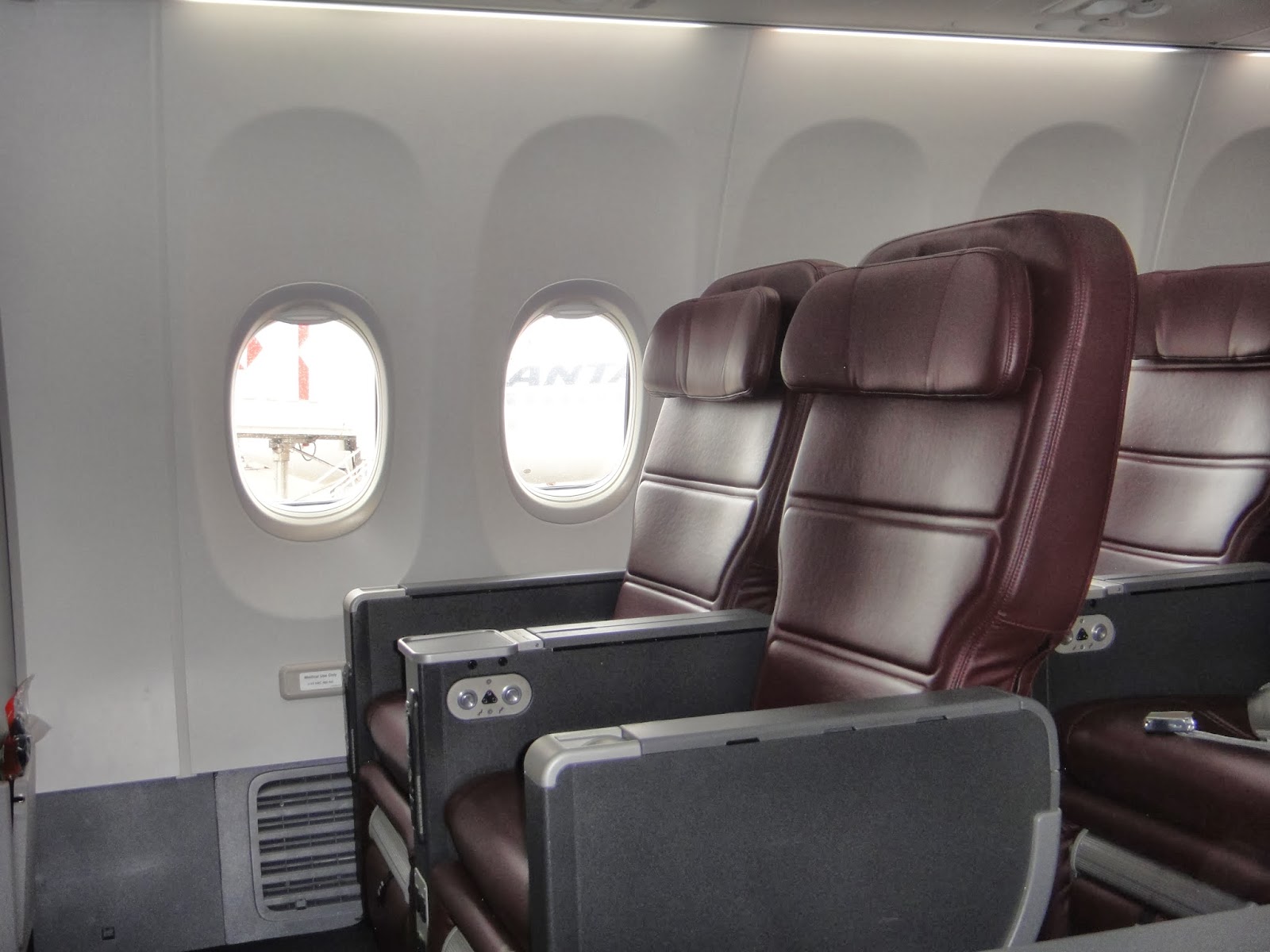 The flight left on time at 9.30am and there was only 3 of us out of 12 available seats. Economy was rather light on too, with 90 out of 156 seats occupied. It was a little cloudy on departure but we were soon flying through clear skies over country New South Wales. 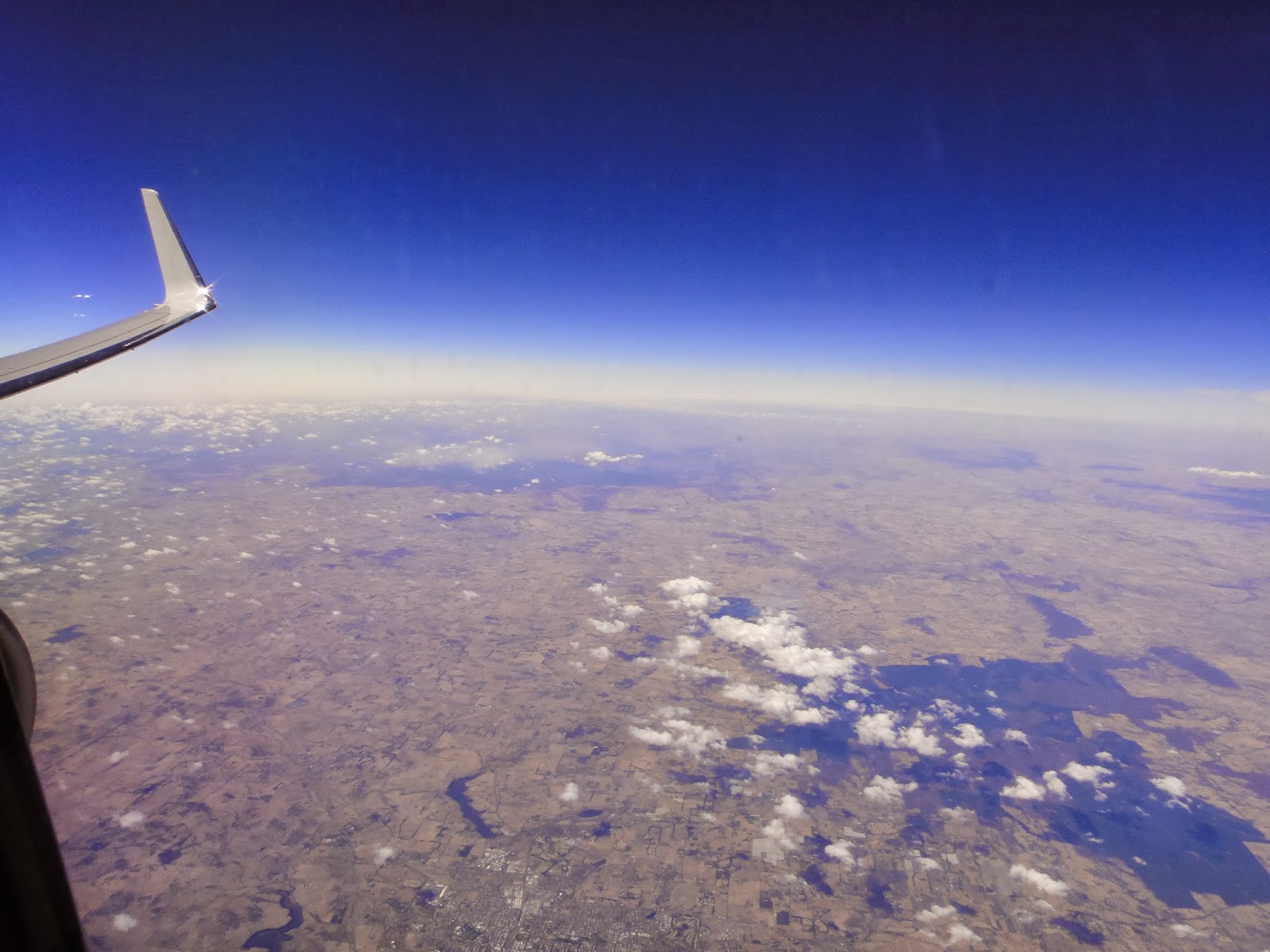 The flight is advertised as a 'refreshment' service. Despite it still being 10am I started off with some refreshments of the wine variety. A tasty South Australian Sauvignon Blanc... 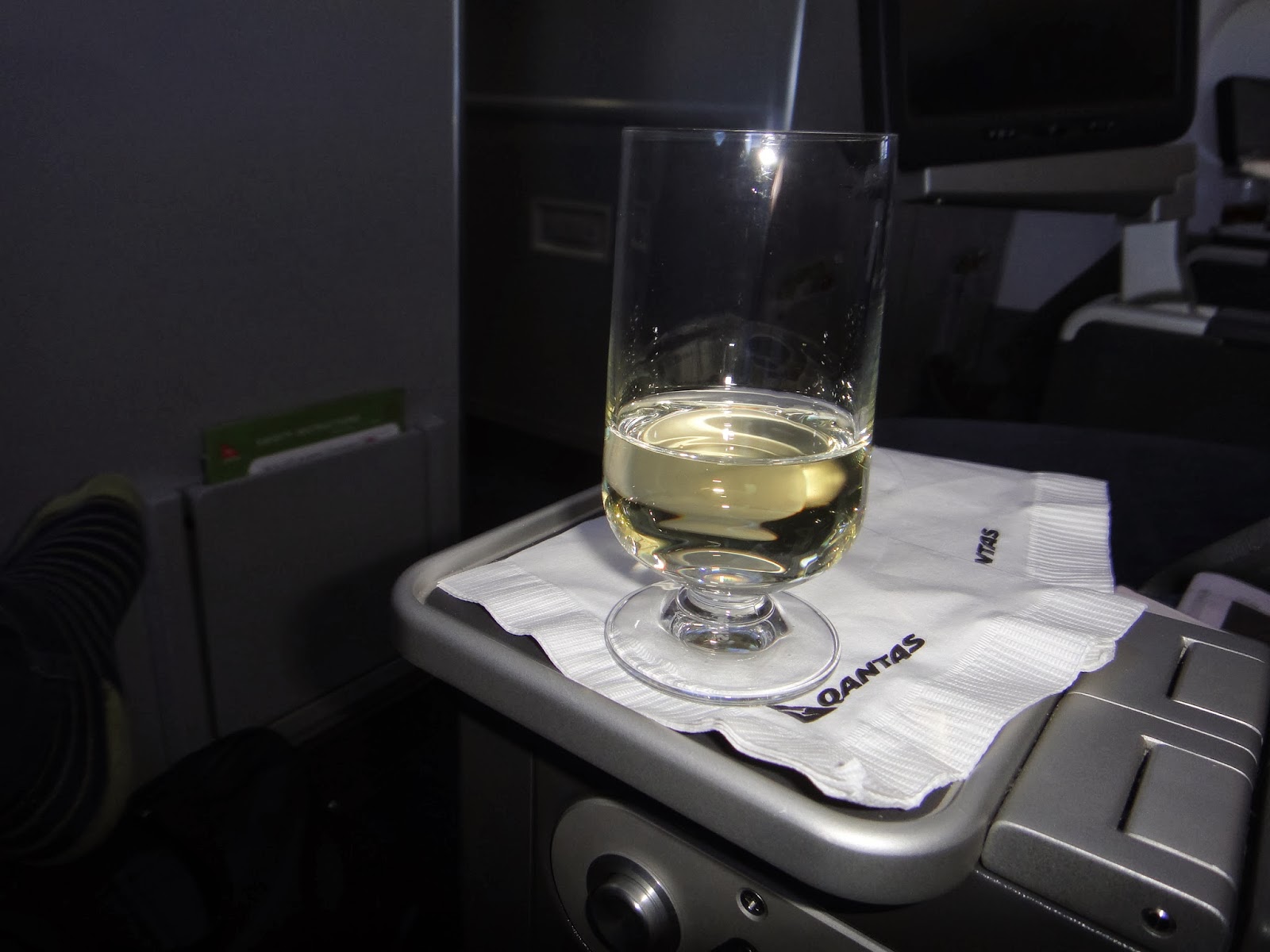 It was served with a packet of nuts. Note to Qantas: why not serve the nuts in a small bowl to add a touch of class and sophistication to the business class product?

Whilst sipping on my wine I settled down with some Australian comedy on the inflight entertainment system... 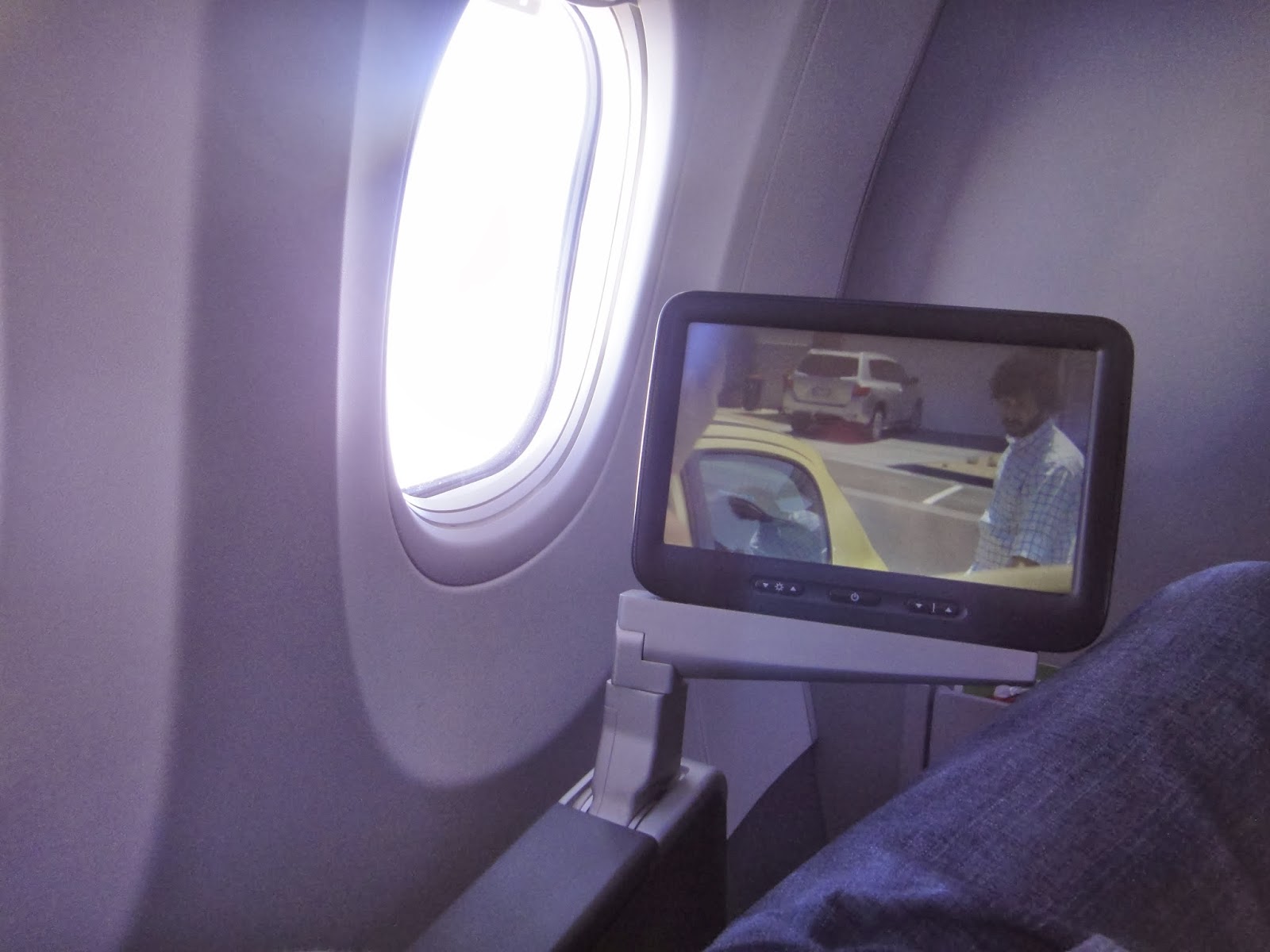 Not long after the refreshment was served. There was a salad, a soup or a cheese plate. I took the soup which came with croutons, a good supply of bread and a sweet which was some sort of fruit slice. Wine topups were forthcoming every time my glass got close to empty. The flight attendant serving in business had probably 30 years experience but was extremely friendly and very chatty and we had a good talk about Alice Springs and also Qantas  in general. 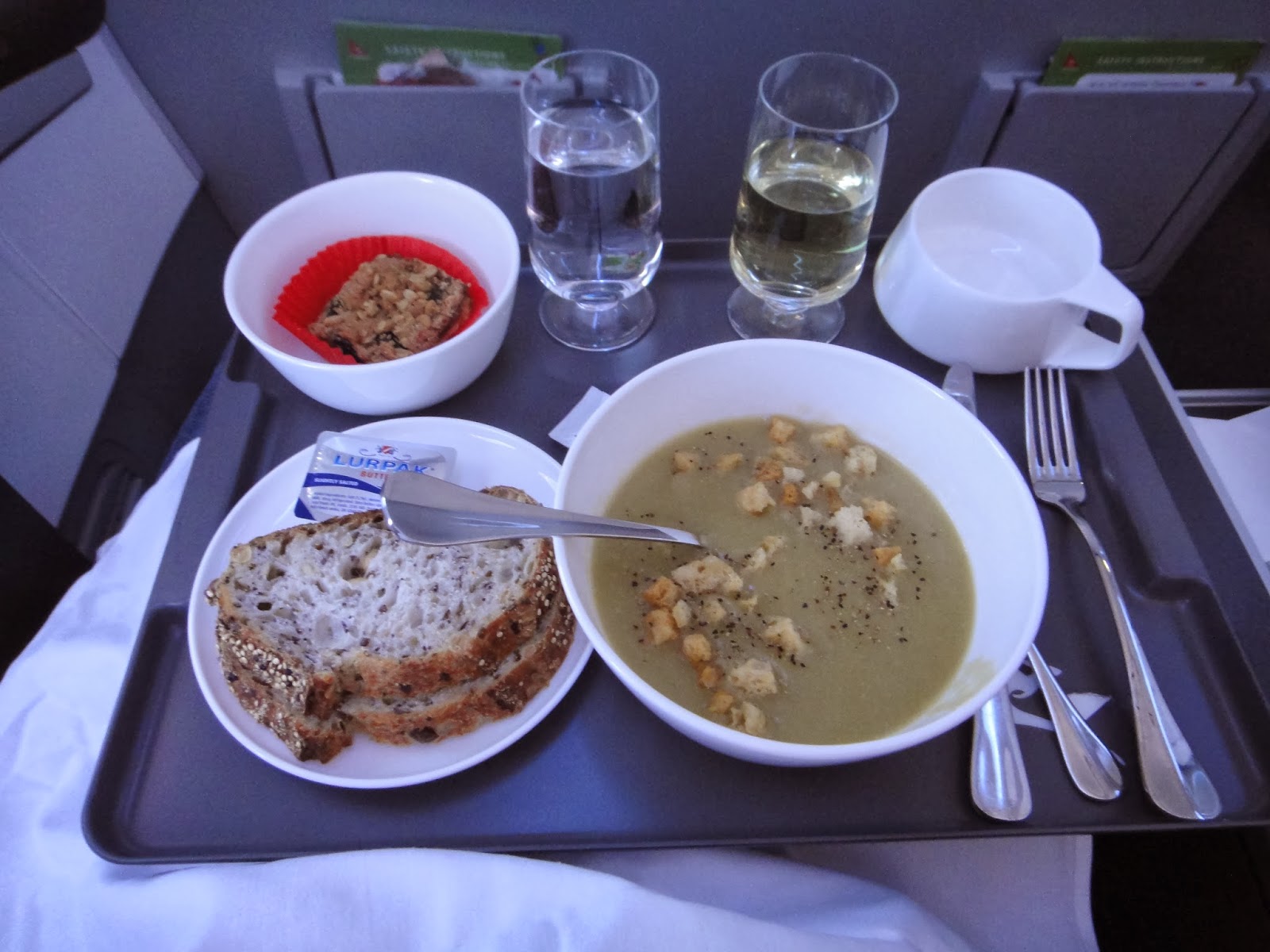 The soup was actually pretty delicious and quite adequate for a morning snack although some people might be hoping for something more substantial for a 3 hour sector. I  ordered some Bailey's on ice afterwards and I was disappointed to hear that Qantas was removing it from domestic business class other than trans-continental flights to Perth. Qantas : please bring back the Baileys!

By the time the food was finished the landscape had changed dramatically outside: 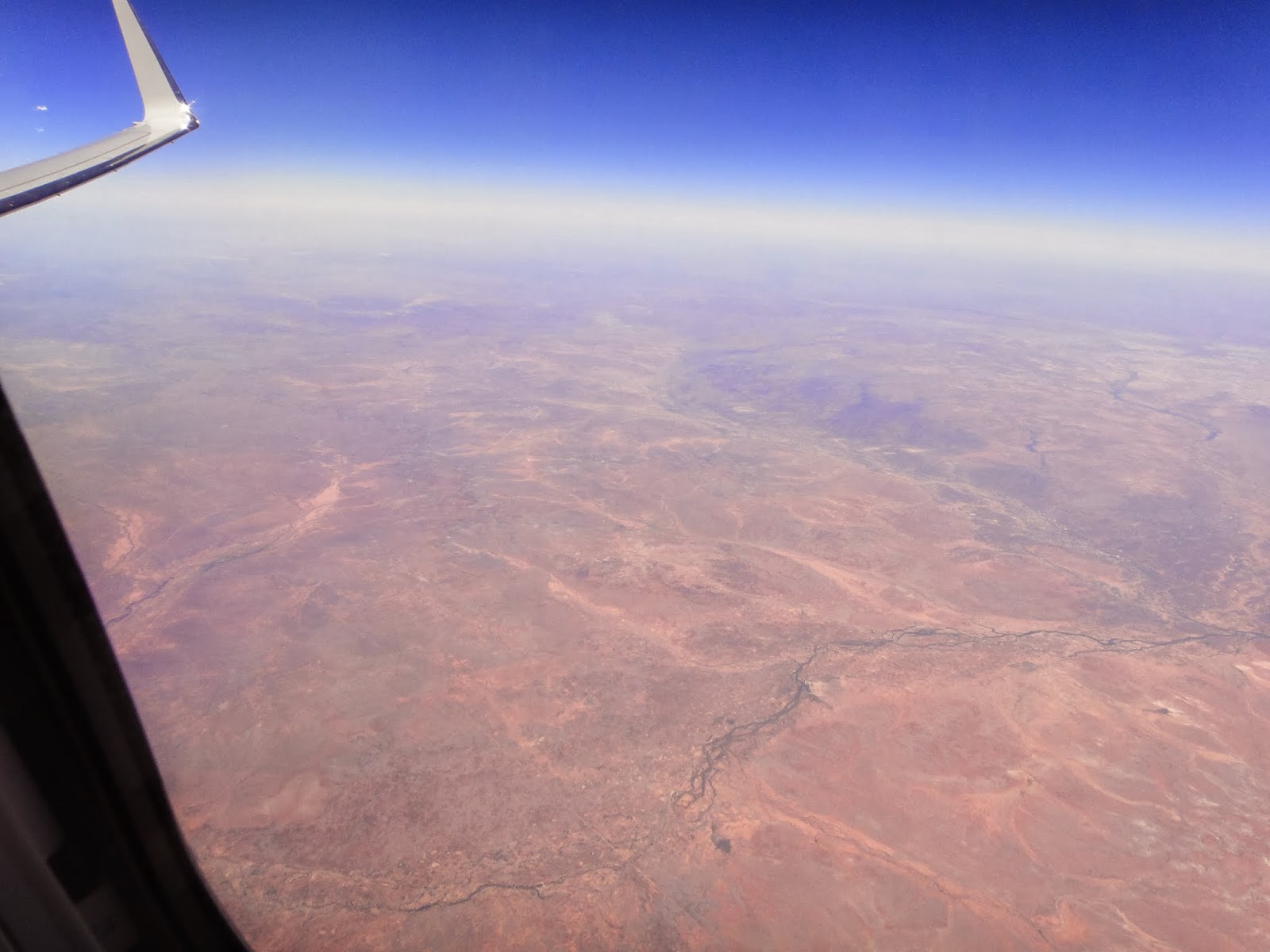 And soon enough we were on descent into a hot Alice Springs where it was partly cloudy and 36 degrees. As we got closer to the ground the hot air caused a bit of turbulence but nothing too severe: 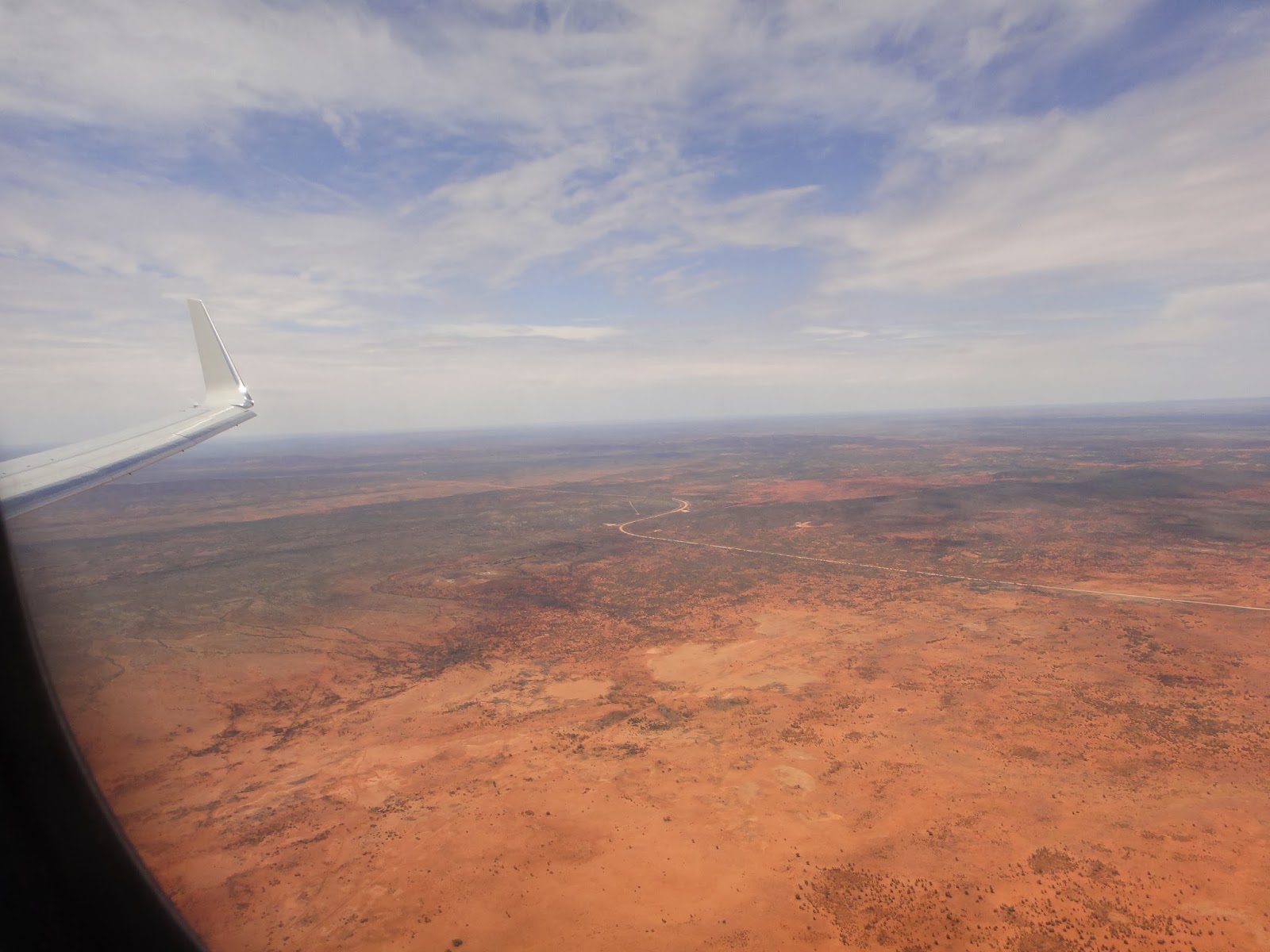 We made a smooth touchdown and headed for the terminal where Qantas is the dominant carrier. On the ground was a B717 from Perth and a B737-800 from Adelaide... 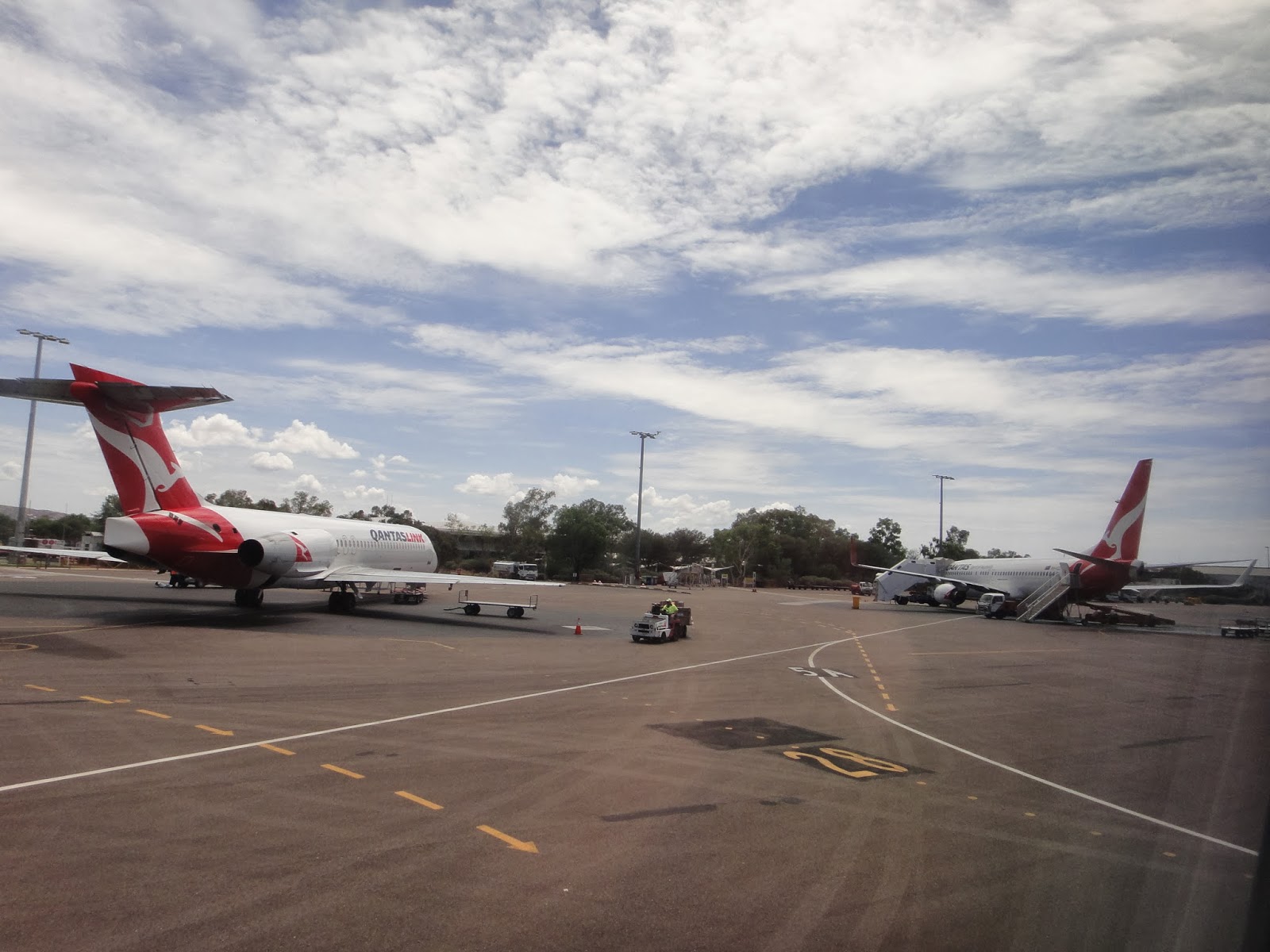 I bid farewell to the crew and exited onto the stairs and into the hot desert heat. It's a couple of hundred metres walk before you are back  in the air conditioned terminal building. 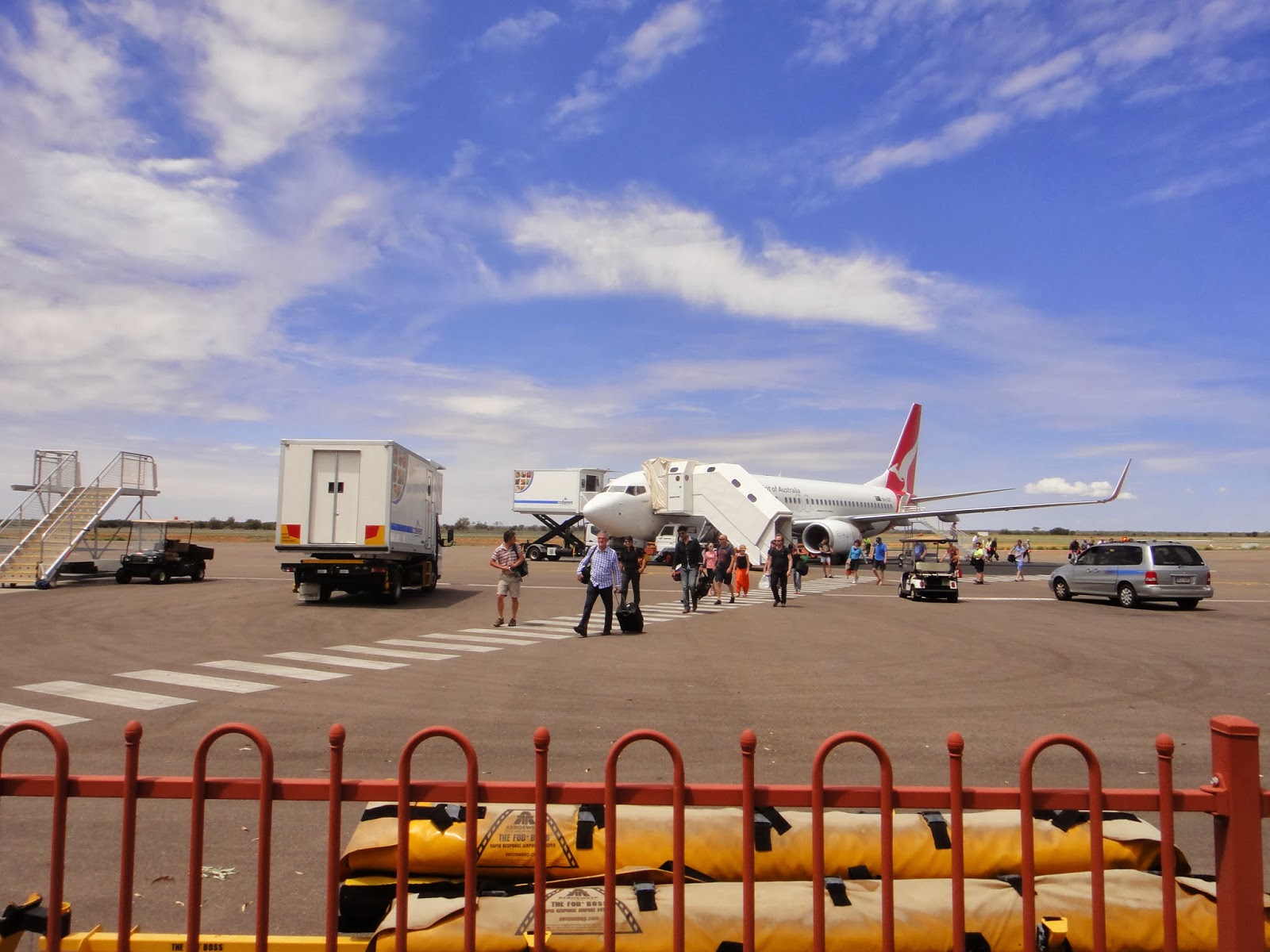 So there it is, another report on Qantas domestic business class. All fairly routine but the stand out was the lovely, courteous and professional flight attendant in charge that was serving in business. She was a great ambassador for Qantas and is one of the reasons I keep flying with them.