British Airways Club Europe - Heathrow to Prague on the A320 BA858

- February 18, 2014
Flying around Europe in business class is not exactly luxurious. The airline industry standard business class is actually just economy seats at the front of the plane with a middle seat blocked. There may be slightly more legroom and enhanced service but this really should be called 'Premium Economy' at best. Here is a look at what BA are offering at the moment on short haul European business class, which they call 'Club Europe'.

This journey begins at Heathrow Terminal 3. My destination on this early January evening is Prague, one of only a handful of destinations that British Airways still serve from this terminal. The vast majority of BA services are operated out of Terminal 5. British Airways still operate a business and first class lounge here though which is used by other carriers like Qantas as well. There is also a First Class check-in zone which was deserted when I arrived. My check-in was handled very quickly and my luggage tagged for Prague with priority tags too. I had an express departures card to use as well which meant I was through security nice and fast.

Although I was only travelling in Business I did have access to the First lounge through my Qantas Platinum (oneworld Emerald) membership. The lounge was quiet as I arrived for this evening service to Prague, the last of the day. I entered the lounge and found a seat and table and headed over for some Champagne. I was impressed to find an unlimited supply of Taittinger Grands Crus which is worth about $100 (AUD) a bottle. Not a bad offering at all!


There is a buffet food option as well as a menu you can order from: 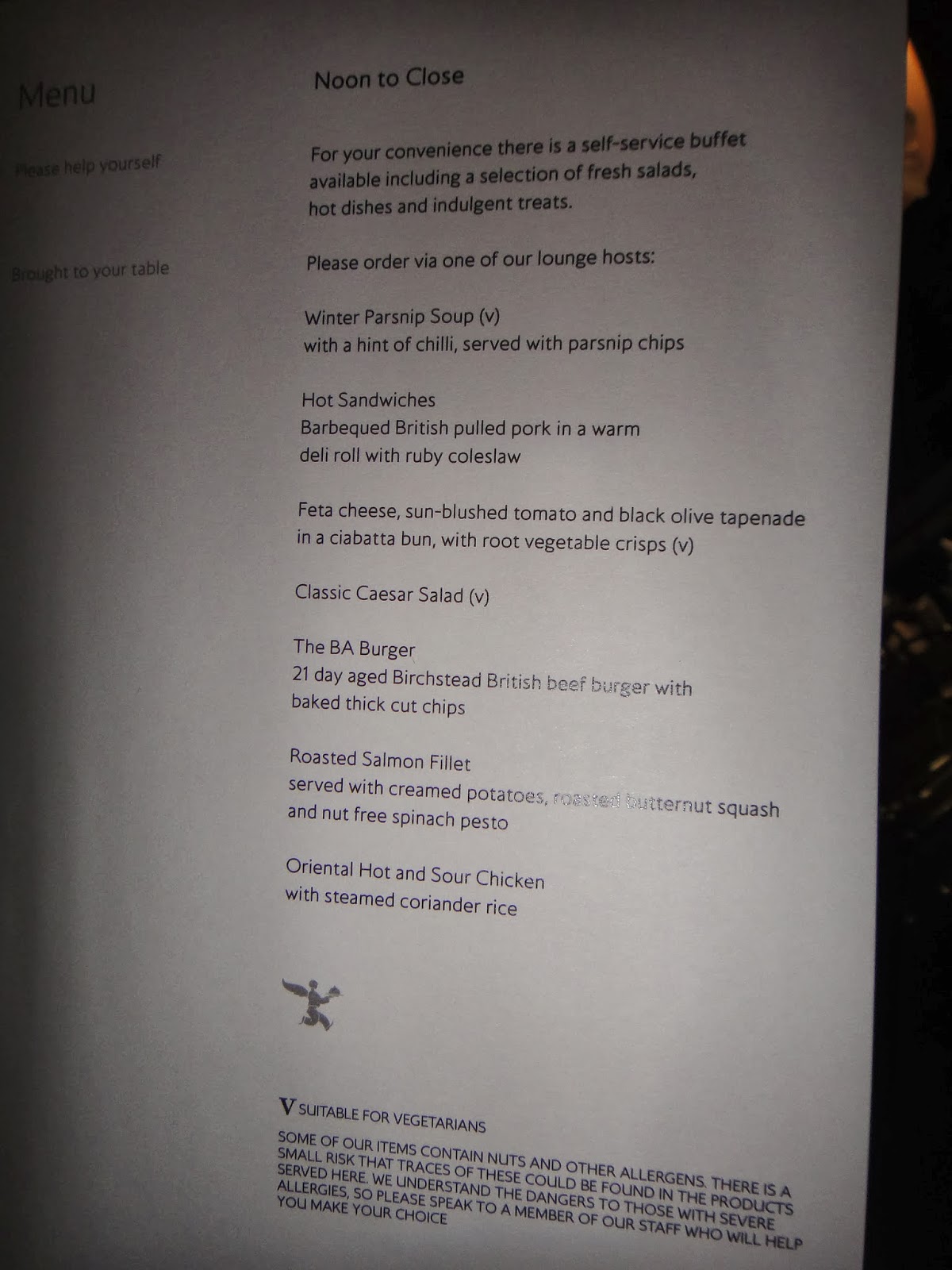 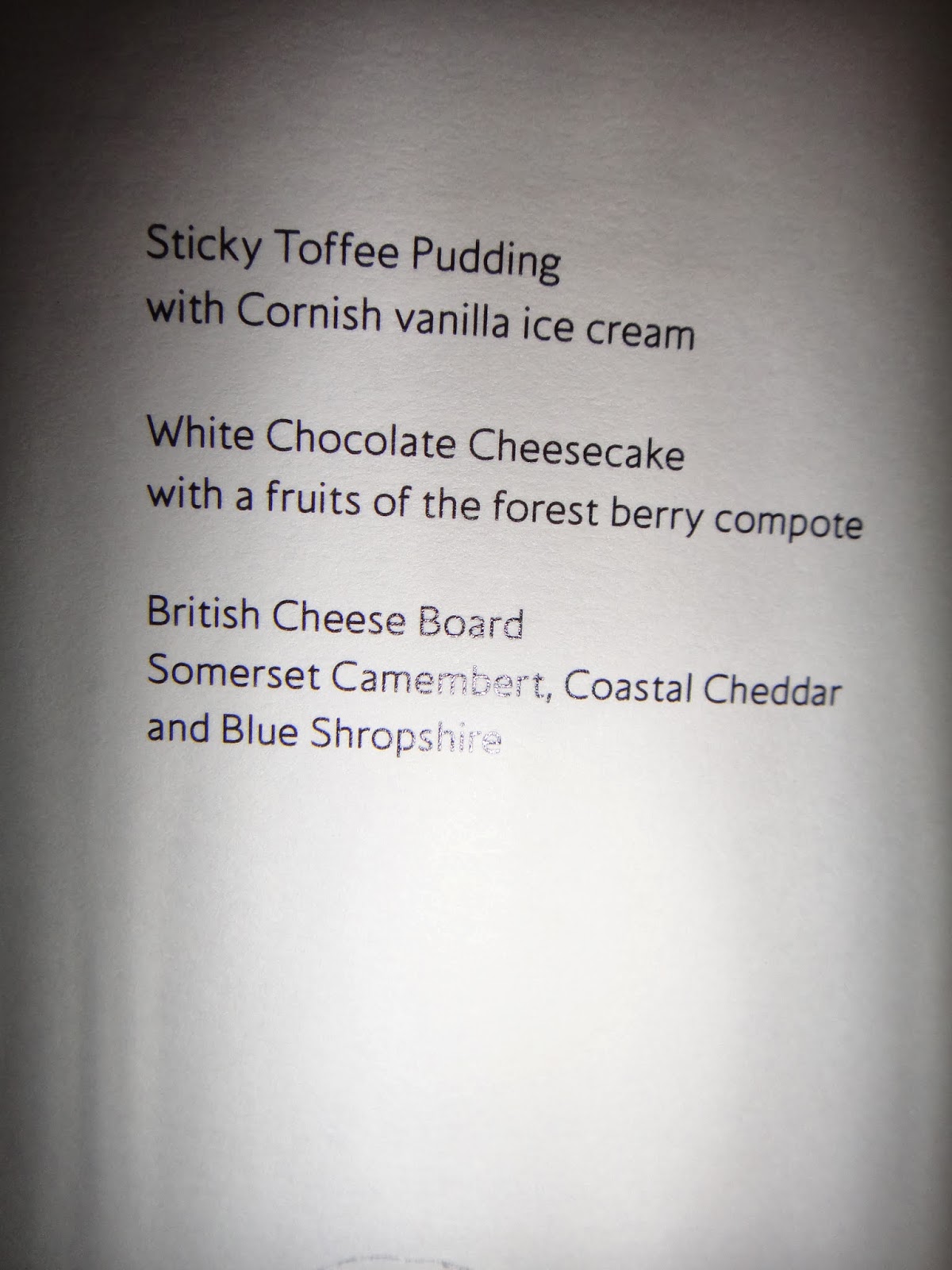 Although the actual restaurant area is not available to passengers unless flying First,the food can be ordered and brought to you anywhere in the lounge. I ended up with the pork sandwich followed by the cheesecake. 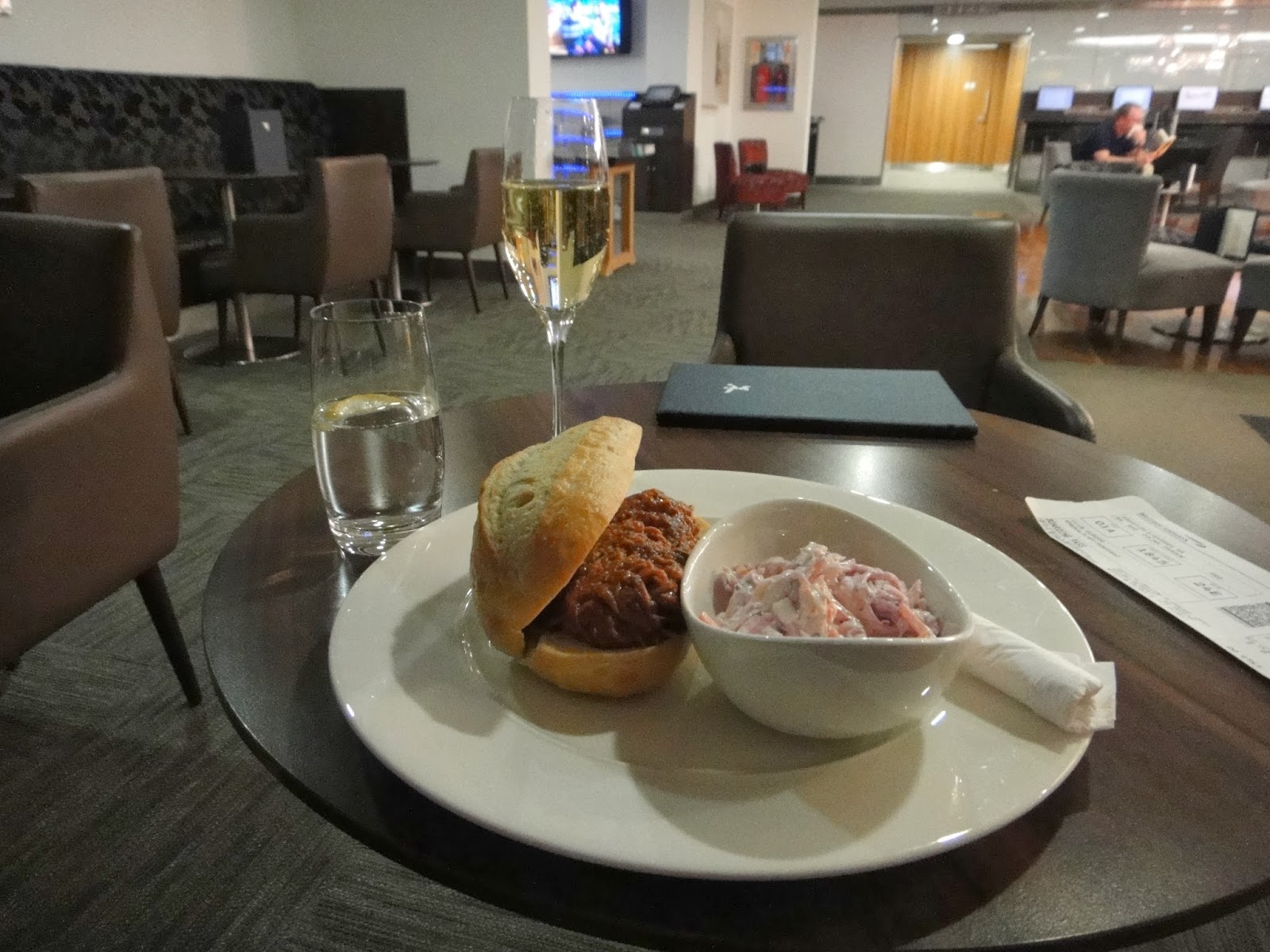 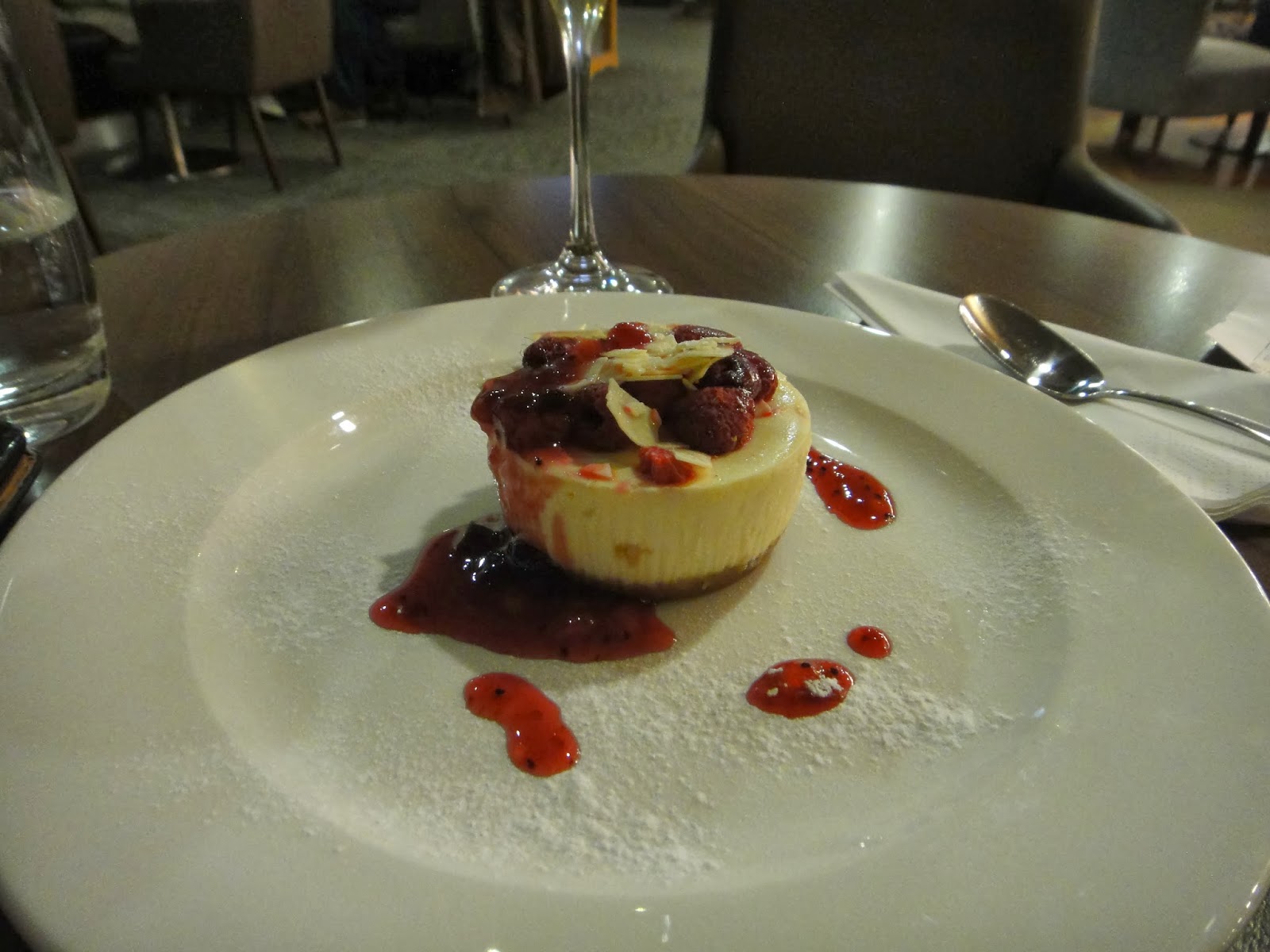 The pork sandwich was rather average but the cheesecake was delicious! It all went down well with the Taittinger which was very moreish and I think I may have had a bottle of it by the time my flight was ready to board!

The flight was going to be delayed about 35 minutes for an unknown reason but that was ok by my, more time for Taittinger. Eventually though it was time to head to gate 24 for British Airways 858 to Prague. 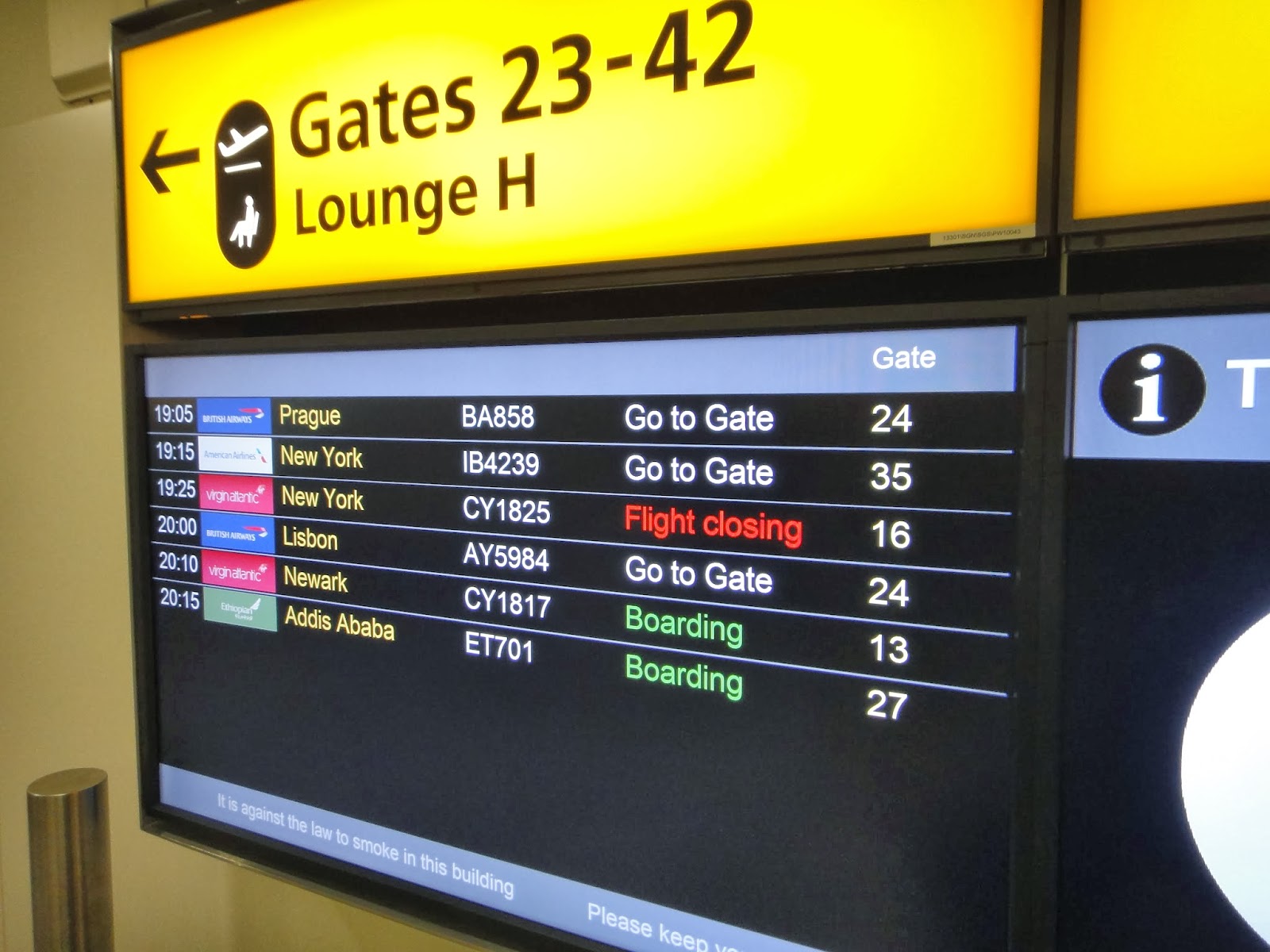 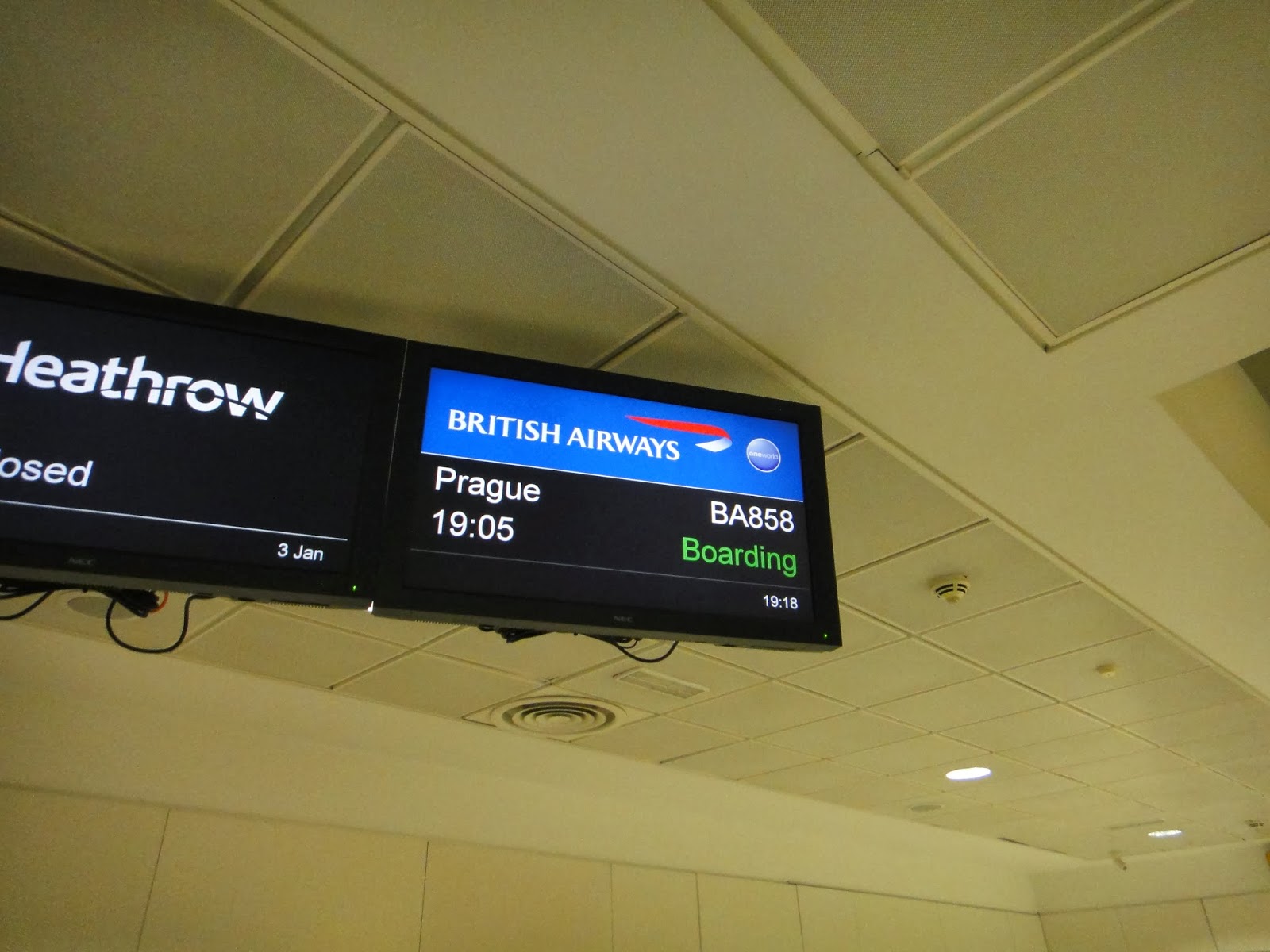 I arrived at the downstairs gate area which I discovered was a bus gate. I think most BA flights from T3 do in fact require a bus to the aircraft, at least they have for me the last couple of times I've departed and arrived here.

I was actually one of the last 20 or so people to board and got the last bus to the aircraft. It was only a short ride and we were soon delivered to our Airbus A320 and ushered up the stairs. Being a January evening it was rather chilly outside but thankfully the stairs are covered to protect you from the elements and we were soon on board and I was direct to seat 1A. 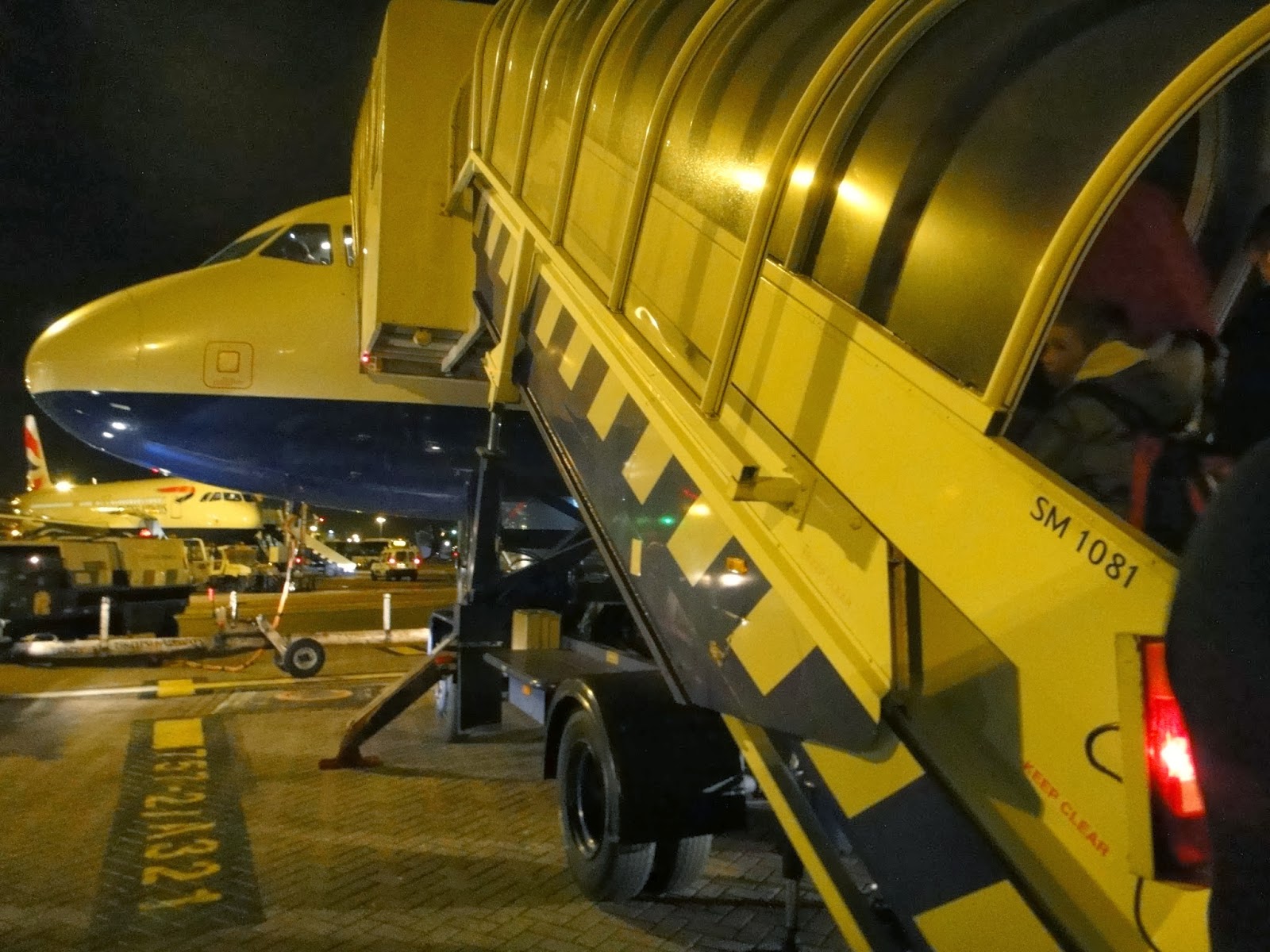 It wasn't  long before doors were closed and I was pleased to see nobody occupying the seat adjacent  to me. In fact the 20 seat Club Europe cabin only had around 5 passengers in total.

There was no welcome drink on offer which was slightly disappointing. Never mind we were soon pushing back and making our way out to the runway, this Swiss A320 beat us to it: 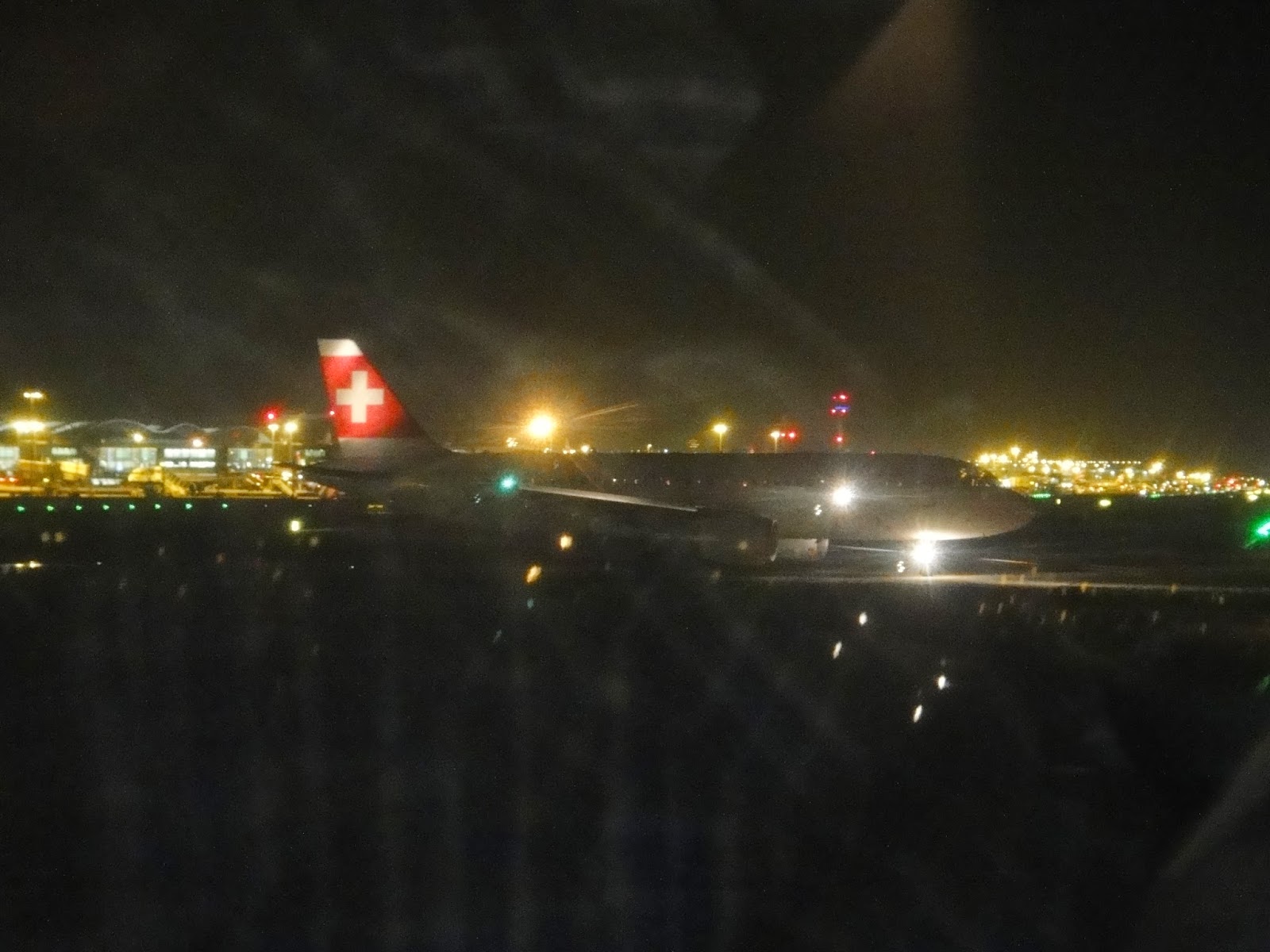 We were close to an hour after our scheduled departure by the time we lifted off and flew over London and set course for Prague. Fortunately flying conditions were smooth and the seat belt sign was extinguished soon afterwards.

The crew immediately went and closed the curtain divider to separate the Club Europe cabin from economy. I suppose this makes it feel a little more exclusive and also helps prevent economy passenger from using the business class loo!


The inflight service commenced with drinks orders and a packet of nuts. I opted for the Champagne which was Pommery and came in an individual piccolo. The male flight attendant placed it on the drink holder on the armrest and I accidentaly knocked it off when I went to pull out my tray table spilling champagne all over the place. I felt a little silly but the crew member was great about it and mopped it up quickly and brought me another bottle! 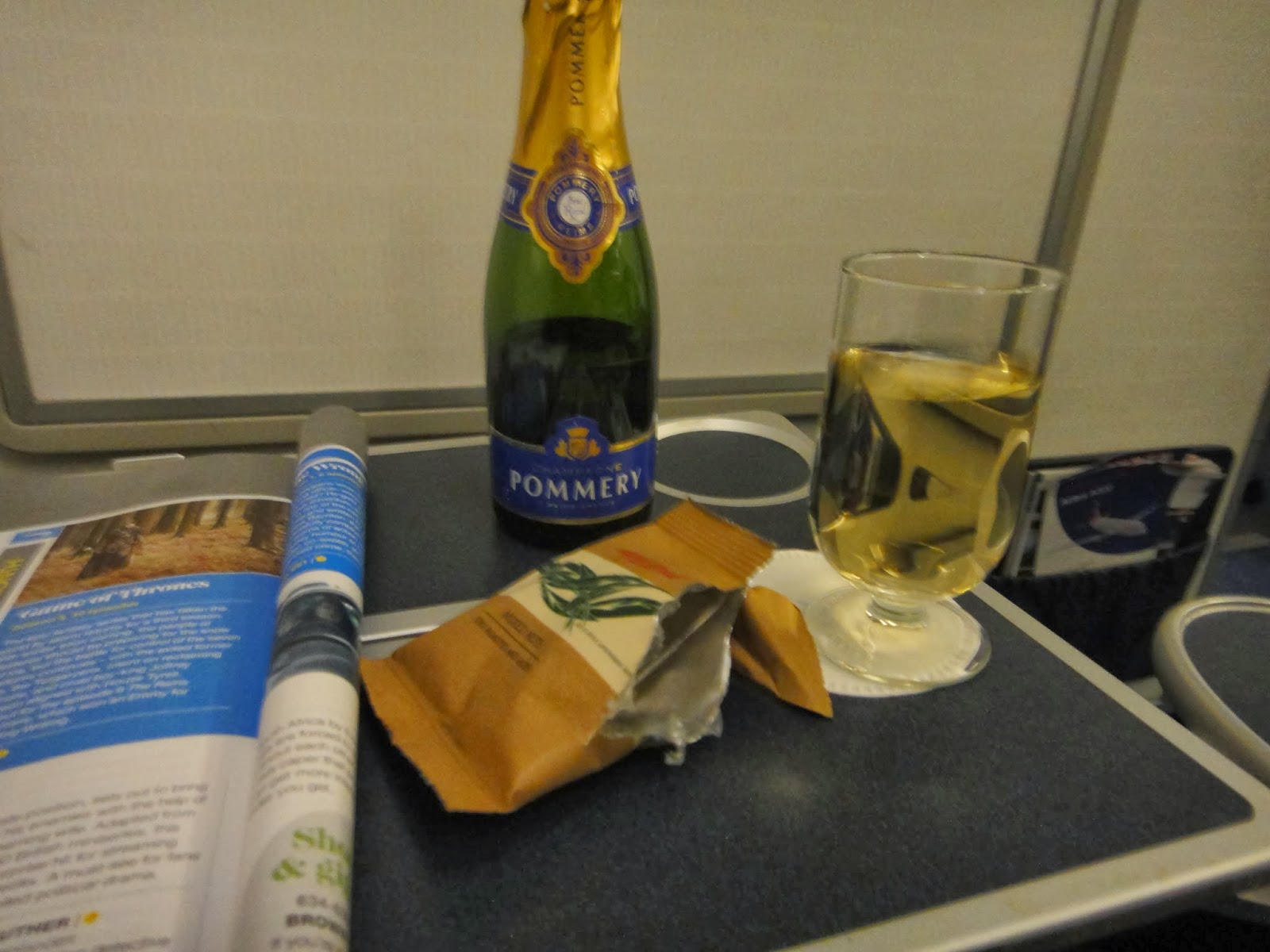 There are no personal entertainment systems available so I would recommend bringing your own on an iPad or other tablet type device. I decided to stick with the inflight magazine as my entertainment. I was offered another pack of nuts but declined. It was time for the dinner service and it was a cold tandoori chicken salad accompanied by bread roll, cheese and crackers and chocolates. 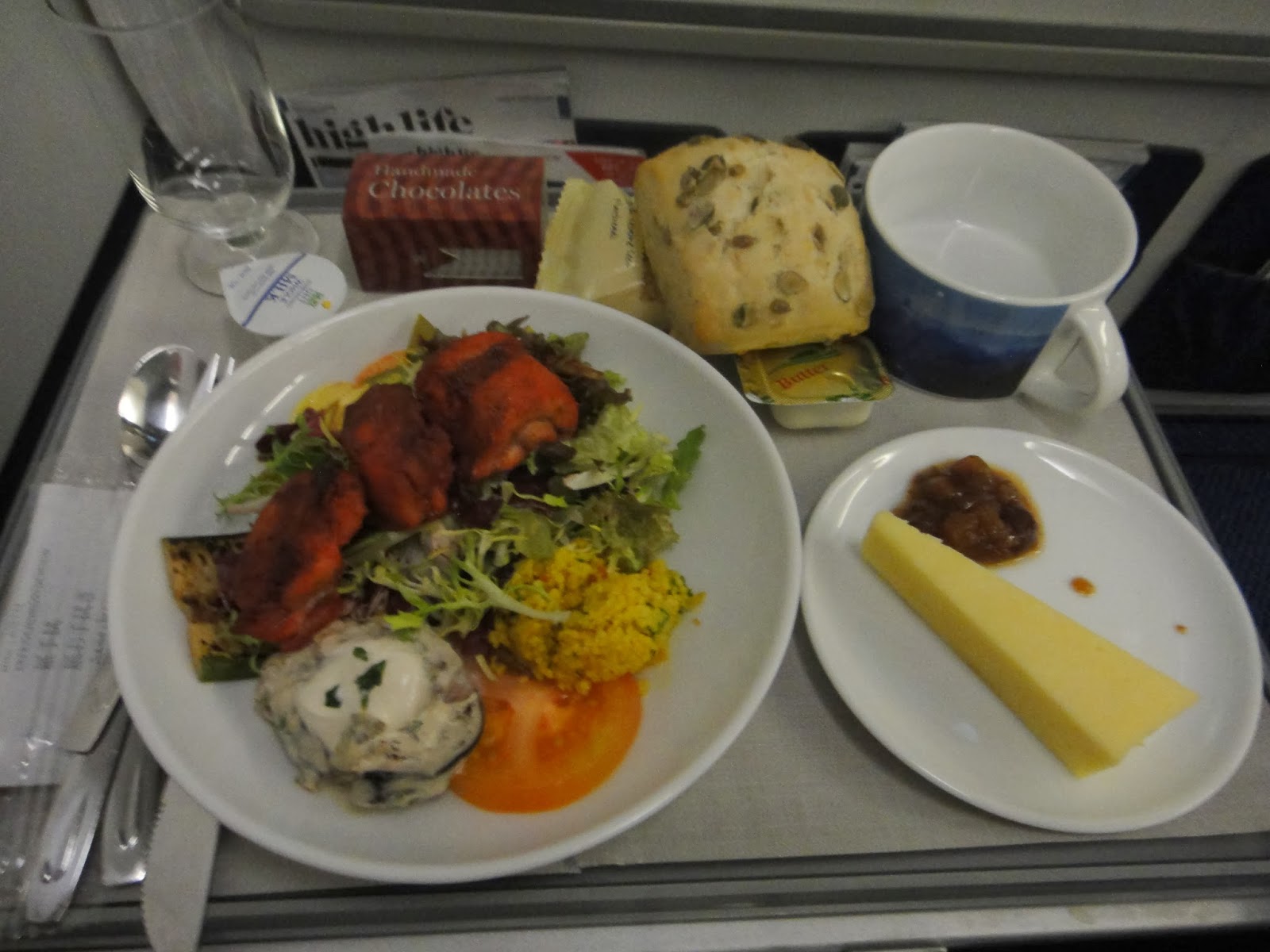 I stuck with the Pommery and managed to finish off 3 piccolos before it was time for a cup of tea to go with the chocolates. By this stage we were already on descent into Prague. 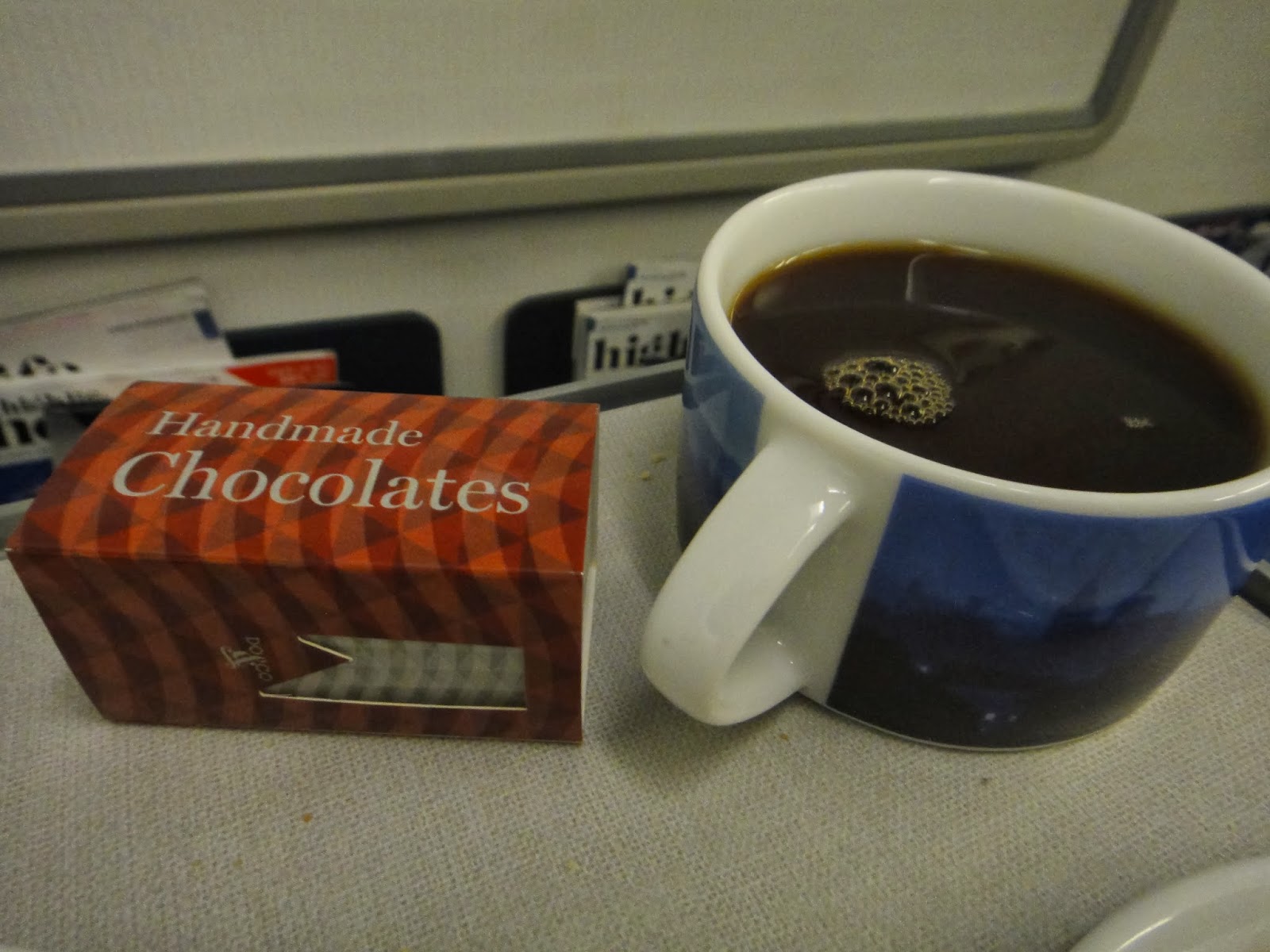 Although British Airways don't usually receive the most favourable reviews, particularly their Club Europe offering, I actually enjoyed this flight. I think the experience will really depend on the crew operating the flight on the day. In my case I was well served by the senior male flight attendant, he was polite and friendly, always made sure I had everything I could want and the meal itself was perfectly adequate.

The check-in experience and lounge facility at Heathrow were both good, particularly the champagne. What lets Club Europe down is of course the seats themselves. A proper business class seat is always going to be preferred over the convertible economy seats that are standard in Europe, but with basically all major European carriers being the same in this regard there is little or no competition with anything better so I doubt this will change anytime soon.