- January 05, 2016
A little under 3 years ago Cathay Pacific debuted their new 'Regional Business Class' product. It's a recliner seat in fixed shells and now features throughout the Cathay fleet on regional configured Boeing 777's and A330's.


Some people were quite disappointed in these seats as they are not up to the usual standard of some Asian carriers such as Singapore that offer angled lie flats regionally. Personally I think they are quite ok for flights of up to 3 hours in length, other than red eyes. I don't have any need for a bed on flights of those lengths. This was my second flight with this kind of seat, having flown on it to Bangkok a year earlier.

Today I was flying on flight CX739, the 11.35AM flight from Hong Kong to Singapore, scheduled 4 hours in length with a 3.35PM arrival in Singapore. After visiting the Pier First Class lounge, the flight boarded on time and I headed to my window seat on the right hand side, 16K.


Welcome drinks were provided and I had a champagne. We pushed back on time and departed from Hong Kong runway 07R.

After takeoff there was a little bit of weather to get through so the captain left the seat belt sign on. Of course this didn't stop a couple of Chinese passengers from getting up and opening the overhead lockers to start rummaging around looking for things in their hand luggage. Some people have NO regard for safety at all, an announcement was eventually made for people to return to their seats.

There are 42 seats in the business class cabin and all of them were occupied on this flight. Despite this the crew were very efficient and able to serve all of us a nice lunch.  I also received a personal greeting from the purser  who went around saying hello to any CX or partner airline elite frequent flyers. This seems to be a regular occurrence on Cathay. 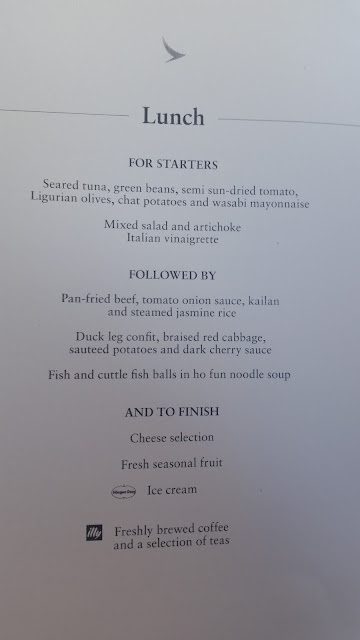 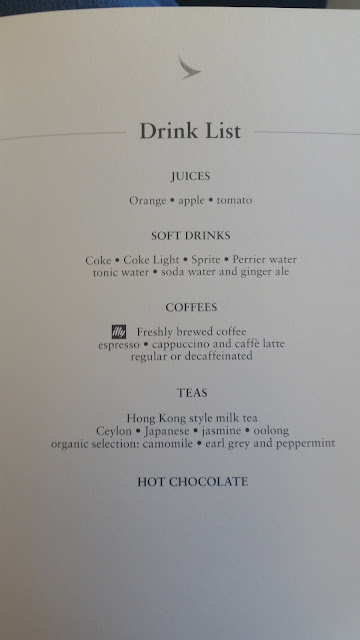 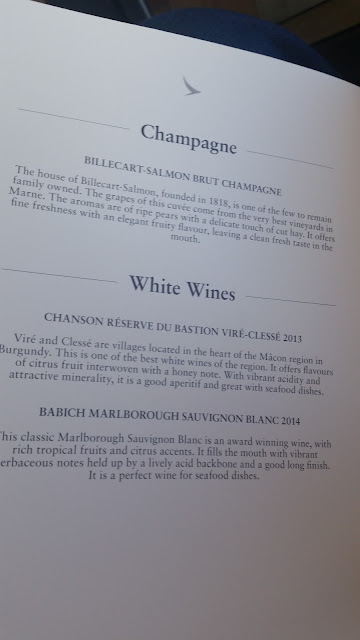 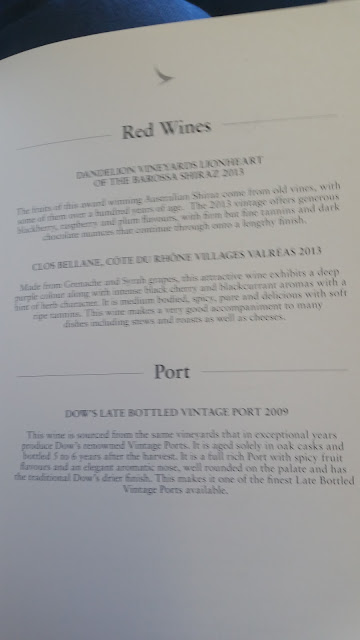 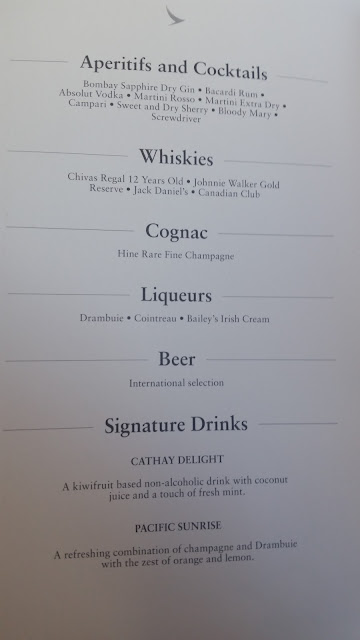 Soon after takeoff nuts and drinks were on offer, I had a champagne: 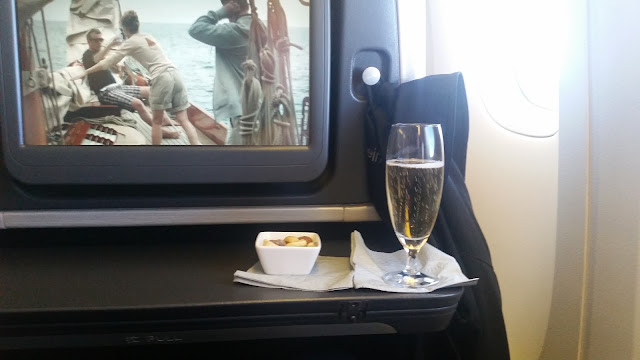 The CX Studio audio/video on demand system was available with full length movies available on this sector, I noticed previously on some shorter flights they only allow you to watch TV shows.

Once again on an Asian carrier I am disappointed in the starter. First of all, there is no choice, so if you don't like it too bad. Next of all it's some kind of seafood. I picked at the seared tuna, but I just simply don't like it. So it mostly went to waste despite the nice presentation. Luckily they have garlic bread! 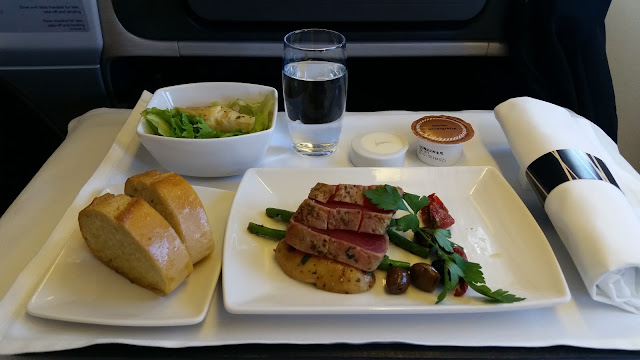 Thankfully the main course was better. I chose the duck leg and it was very tasty. I drank the French white from Burgundy and I was happy with it. I managed to get regular drink refills even though the crew had their work cut out for them.

Cathay still use these casserole style dishes for their mains, even on long haul (except I believe they are trialling a new service standard on some routes at the moment). They are fine but they are basically only a small upgrade from economy class presentation.

I noticed my seat companion could not decide what wine to drink... have a look at his lineup!

Next was the fruits and cheeses. They were served from a trolley and plated individually at each passengers seat. I thought that was nice, same as you would get on long haul.

Then finally the Haagen Dazs ice cream served in a tub on a plate. There was a number of flavours available and I chose strawberry, along with a peppermint tea. 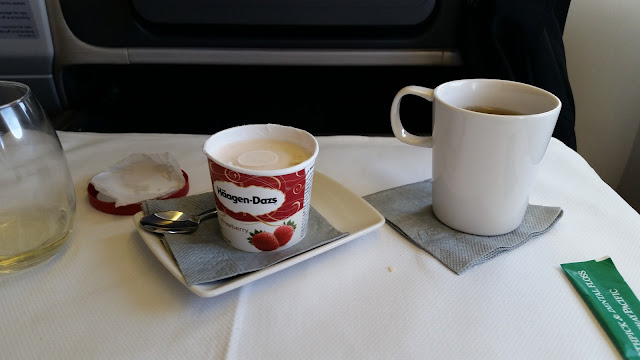 Overall and despite the fact that I didn't like the starter, I found the meal very good. I had actually been half expecting it to appear on a single tray. But instead on this longer regional flight it was served in individual courses much like on a long haul flight. I was very impressed at how well the crew handled a full cabin, I did feel quite well looked after throughout lunch. The whole dining experience took about 2.5 hours, so by the time it was over we were already close to top of descent.


We landed on schedule in Singapore and I headed off to the lounge for a rest before my onward flight to Abu Dhabi on Etihad.

Cathay regional business class is a decent product, it may not have the best seat in the industry but I found it comfortable and the service was great. All in all a nice flight, but Singapore Airlines would be the pick of the carriers on this route pair if looking for more comfort and privacy.
Boeing 777 business class Cathay Pacific trip report