Etihad 473 : Singapore to Abu Dhabi First Class on the B787-9 Dreamliner

- January 18, 2016
Singapore is one of the destinations that saw the introduction of Dreamliner service in 2015 with Etihad Airways, previously the Airbus A330 operated on this route. This review is of flight EY473, a 7.20pm departure from Singapore.

Firstly, the lounge. Well it is a massive disappointment. The lounge is the Terminal 2 SATS lounge, which is a generic lounge used by various airlines (including TIGER AIRWAYS...  yes that's right, Etihad First class passengers are using the same lounge as Tiger Airways). There is a very small area reserved for First Class passengers, separated by a few pot plants from the rest of the lounge.

The food selection in the lounge was terrible, a few pretty unappetising looking dishes in bain marie's, along with a fairly average drink selection too. Do not arrive early at the airport to experience the lounge, there is nothing of interest here at all. I left early and walked to the gate.

I noticed today's flight was being operated by A6-BLA, the same aircraft I had flown on earlier in the year to Washington. Boarding commenced around 7PM and I made my way to 2A, a forward facing first class suite. In this arrangement 1A and 1K face backward, whilst 2A and 2K face forward.

The seats are similar to those found on the B777 fleet, although with a few mostly aesthetic upgrades. I found them very comfortable for lounging and sleeping. I was asked if I wanted a drink and I ordered champagne which came on a silver tray with welcome note, dates and wet towel. 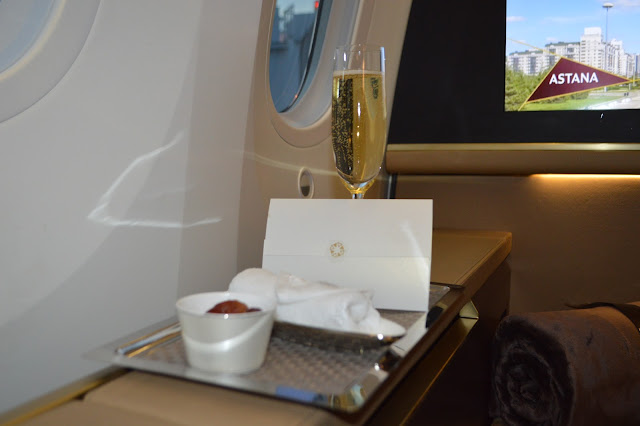 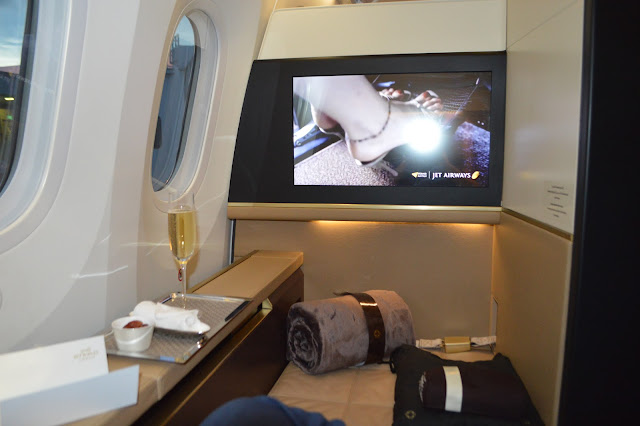 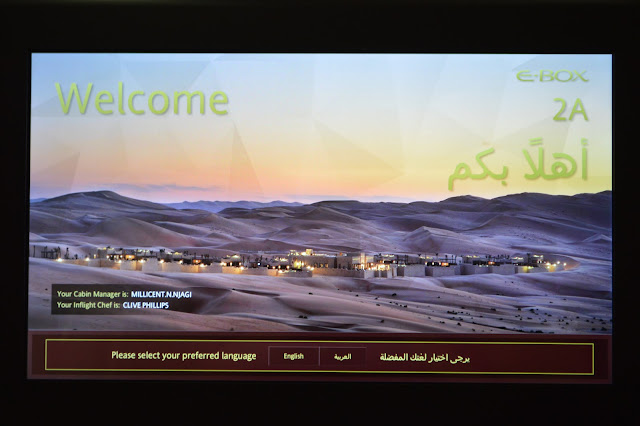 The Etihad first class cabin on the 787 features 8 seats, there is only 2 cabin crew working in this section. The inflight chef and a flight attendant. I found this inadequate and I thought the service was very slow throughout.

After takeoff it was time to go through the menu with the chef and plan my meal, here is the menu: 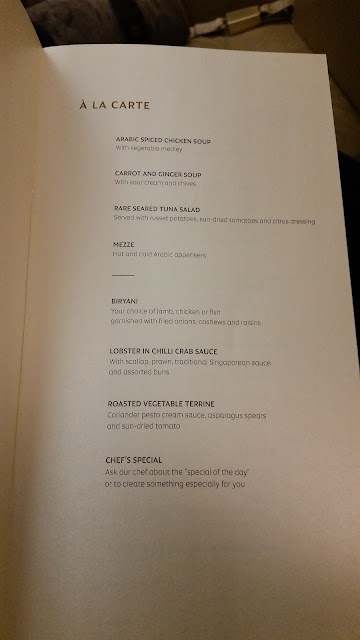 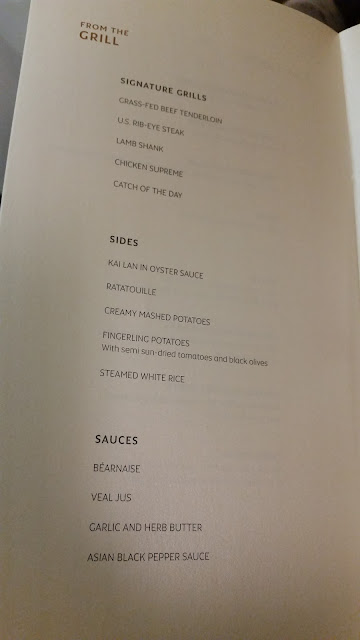 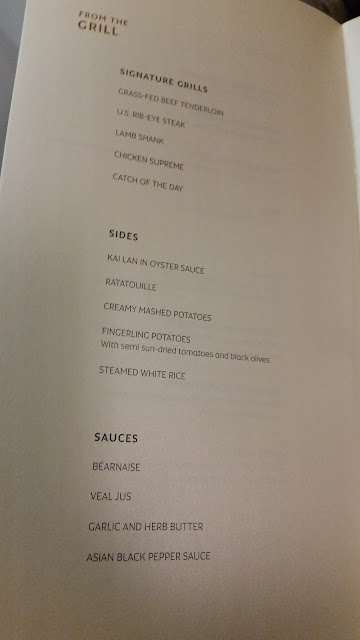 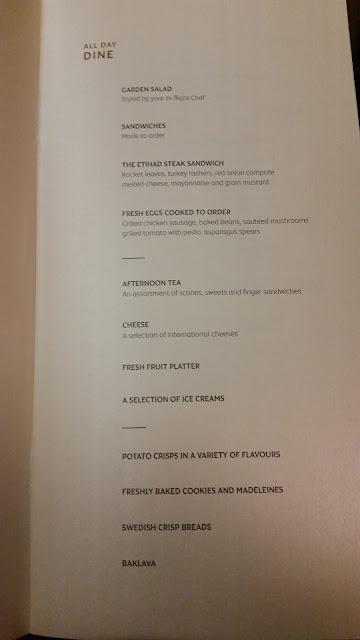 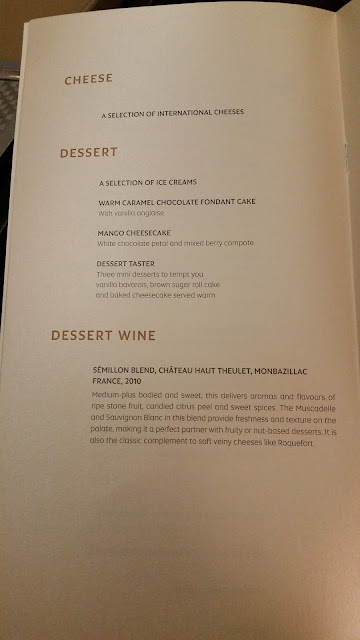 After discussing my meal options I ordered my first drink, more champagne. The champagne is Bollinger La Grande Annee. It came with 3 small bowls with nuts, olives and dried vegetable crisps. 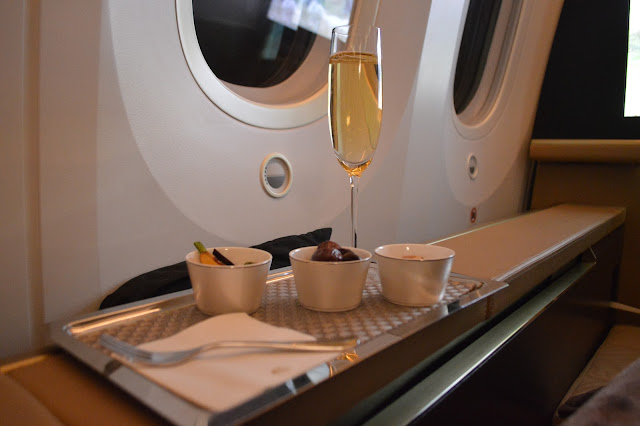 It seemed like a very long time before my table was finally set up by the flight attendant. Since all 8 seats were occupied she had her work cut out for her. Drink top-ups were hard to come by.

I ordered a white wine to go with my starter but at first I was given a red wine, there had been a mixup. The error was recitfied though and my white wine was soon poured.  To start there was an 'amuse bouche', which was not featured on the menu. I've already forgotten exactly what it was but here is a picture: 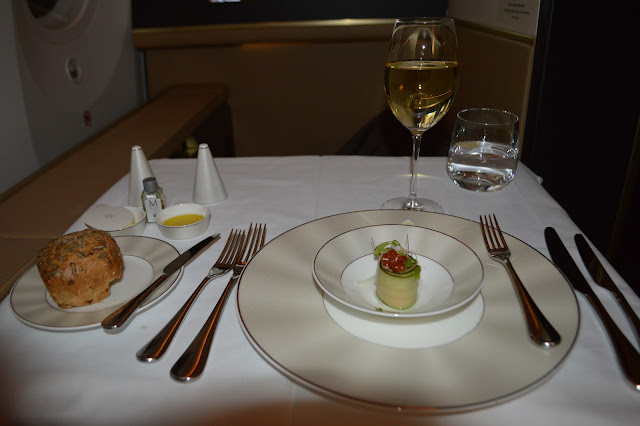 I went with the hot and cold arabic mezze plate next which was very satisfying: 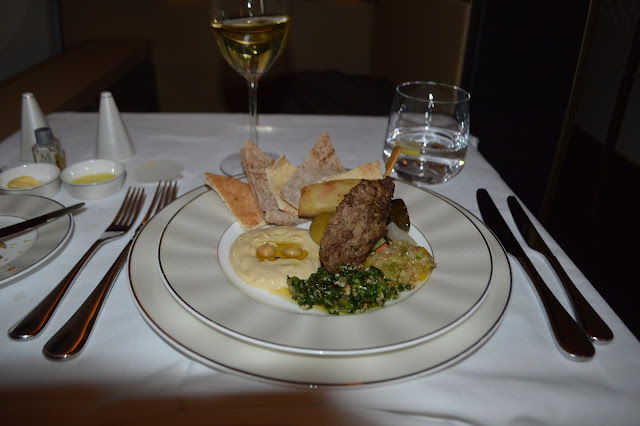 I was then given a sorbet palate cleanser, unfortunately it had almost melted by the time it reached my seat: 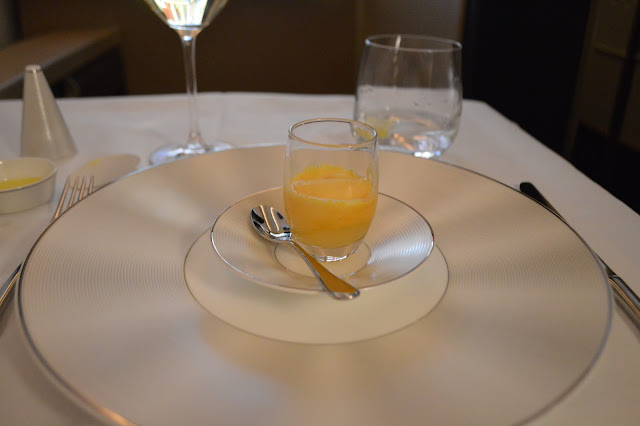 The main course was the steak with truffled mash potatoes and seasonal vegetables. I was actually very impressed with this course, the meat was delicious and so was the potato! I switched to a shiraz to drink with my beef. 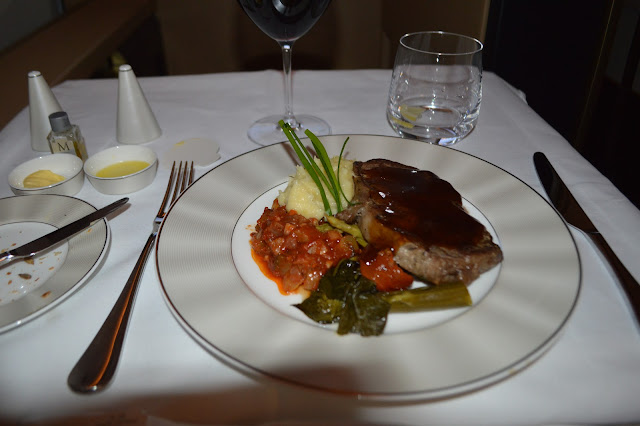 I was getting quite full but managed to finish off with the mango cheesecake, which was nice but nothing out of the ordinary... 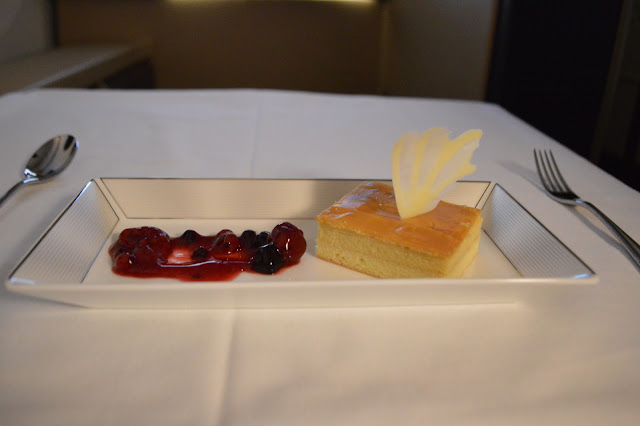 Before bed I ordered a pot of tea... 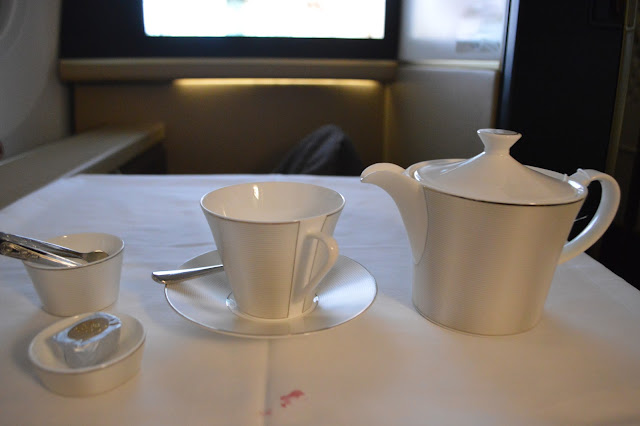 Although the food was very satisfying and beautifully presented (nice work from the on board chef), the service was just slow and impersonal.  One flight attendant to serve and look after a full cabin of 8 passengers is just not adequate. Singapore Airlines would have 3 serving the same number of people. The service was long and drawn out and getting refills on drinks was quite difficult. The length of time it took means less time to rest also. The lavatories also receive no attention at all from the crew so they quickly become less than clean, something you just would not see on Singapore Airlines.

With dinner over I had the flight attendant convert my seat into bed mode, this was done reasonably promptly and I thought the bed was super comfortable. 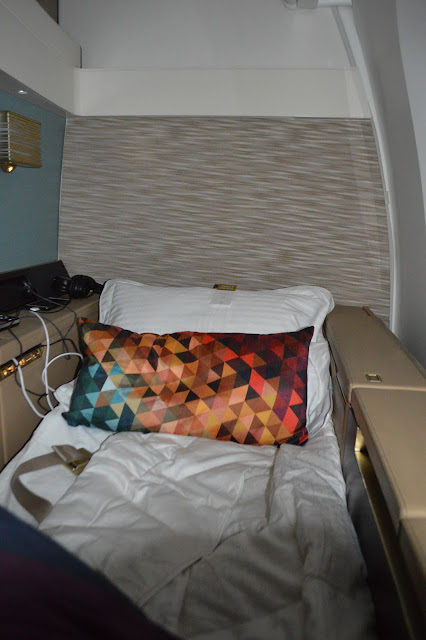 I forgot to mention earlier, the B787 is equipped with wifi and at the time of my flight it was available for free in first and business class. I was using it throughout the flight and found it worked quite well.

More food is available on demand, depending on what was left after dinner. I decided after about a 3 hour nap on this 7 hour sector, that I would have some fruit and tea before arrival in Abu Dhabi. 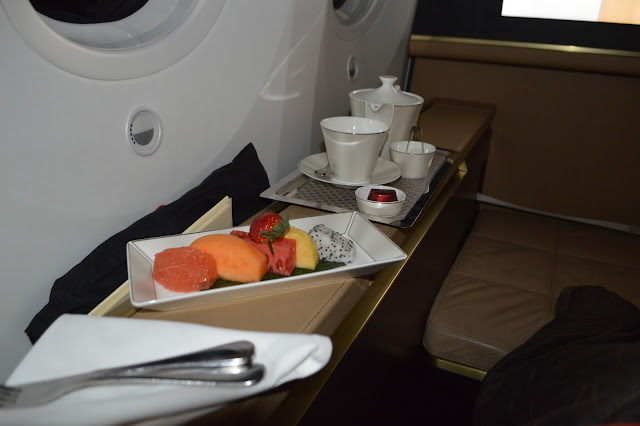 The fruit was delicious and fresh and served on a small plate along with the tray containing my tea. I was able to put it on my side table.

We had been making excellent time and we actually landed in Abu Dhabi 30 minutes ahead of schedule. We ended up parking at a remote bay away from the terminal. Normally you would expect a fleet of buses to be waiting for you but instead we had absolutely NOBODY. There was no stairs, no buses, nothing at all. We spent over 45 minutes just sitting on the plane before we finally were allowed to disembark. Absolutely pathetic performance Etihad, but not that unexpected to be honest in Abu Dhabi.

This flight was full of positives and negatives. I absolutely love the Dreamliner aircraft, the seats, AVOD system, bedding etc are all just wonderful. The food too was brilliant, among the best in the sky I think. What let them down this time was the service aspects, there is not enough attention given to the passengers when you only have a single flight attendant in first class (with the chef doing food preparation). It might be fine if the cabin is half full, but not when all 8 seats are occupied.

The other disappointments were the lounge in Singapore which is abysmal. About as far from first class as it gets. Then the arrival in Abu Dhabi where they were completely unprepared for us. I don't appreciate being stuck in a plane on the tarmac for extended periods of time when I had been hoping to get to the hotel for some rest before a big day the following day.

So there you have it, my review of the Etihad 787 first class experience, not the best. Fortunately my next flight was in the A380 apartment, and that one exceeded all my expectations! Stay tuned for that report later this week.
boeing 787 Etihad First Class trip report