- January 05, 2017
During my trip to India a couple of months back I used the services of several local airlines, including the LCC IndiGo which is now the largest carrier in India in terms of passengers carried. They are one of the worlds fastest growing airlines with literally 400 Airbus A320's on order! Quite incredible.

I had the need to get from Goa to Bengalaru to meet up with my Singapore Airlines flight and IndiGo was one of about 4 carriers flying the route. They offered the best schedule and best price so I booked a seat for just 1900rs (AUD38) and then added a front row extra leg room seat for an extra 600rs (AUD12). IndiGo includes a basic checkin baggage allowance of 15kg with additional at around 100rs per kg.


After passing through the usual multiple layers of security at Indian airports I headed to check-in which was almost deserted. No queue at all, my bag was quickly tagged and boarding passes in hand it was time to head to the departure lounge.

It's a basic airport with a few overpriced shops and a couple of food options. There was loads of people waiting around for their flights. I found a seat and patiently waited for boarding to be called. Interestingly the announcement came much earlier than I expected, almost an hour before the scheduled departure actually!

We had our boarding passes scanned then it was onto a bus to head to our aircraft which was parked at a remote stand. I had been hoping for an A320neo to operate my flight (IndiGo is the A320neo's largest customer) but unfortunately it wasn't to be. Instead, today's flight was to be on board VT-IDU, an A320-232 with 10 years of service under her belt. She had flown with a bunch of different airlines including AtlasJet, Saudi Arabian, Jetstar, Jetstar Asia, WOW Air and finally leased to IndiGo in 2016. The interior had been fitted in the standard IndiGo seating which is a slimline blue fabric seat. 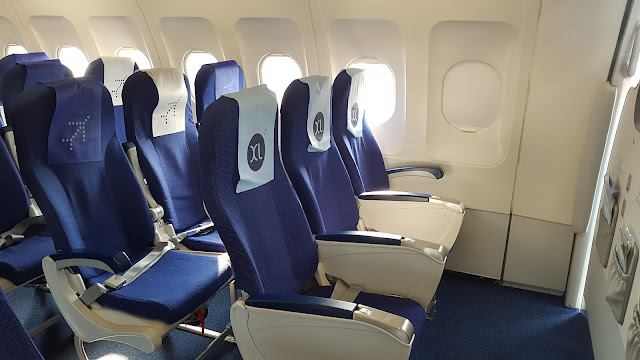 I was really impressed with the amount of legroom in row 1 bulkhead. It was fare more than I had experienced previously on row 1 with Jetstar (in fact the legroom is better than Qantas or Virgin B737 business class). It's definitely well worth the upgrade with the fast boarding and disembarking plus heaps of room.

We sat for quite some time on board and eventually departed close to the scheduled departure time. After a lengthy wait at the holding point for some military aircraft (Goa Airport is actually an air force base)  we lined up and took off towards the ocean. After a series of turns we climbed high above the clouds and the inflight service commenced. 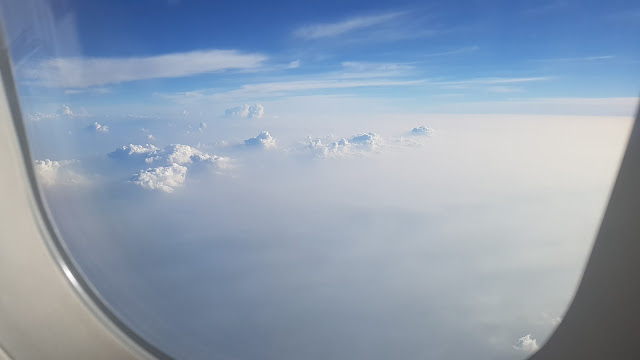 It was extremely low visibility in Goa but as we headed inland the air really cleared up. I chose not to partake in the buy on board service, there was no need for a flight time under 1 hour. Eventually we made a smooth landing into Bengalaru for an on-time arrival: Another look at my seat 1K (note the inflight magazine is called Hello 6E, a clever play on words with the airlines 2 letter IATA code): 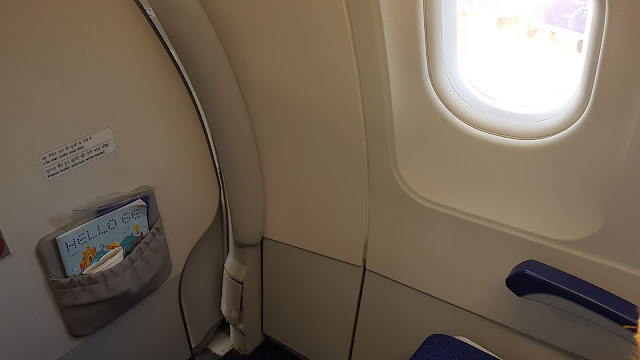 IndiGo tend to use these ramp stairways instead of actual stairs, they are quite handy if you have roll a board luggage or for those in wheelchairs: 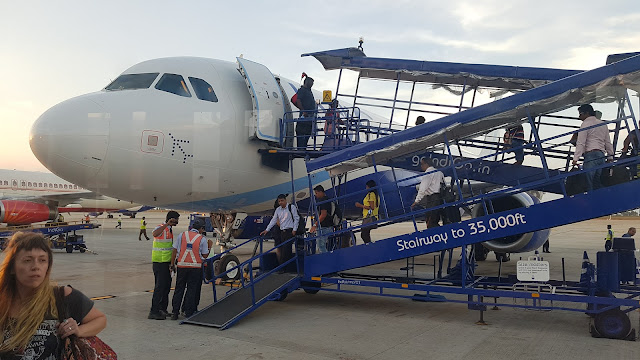 We were once again bussed to the terminal from a  remote parking spot. The airport in Bengalaru is really modern and a real pleasure compared to Goa.

This was actually one of a couple of IndiGo flights I had in India and I found them to be excellent! Great website, good prices, on time flights and a modern fleet. I love the marketing and branding they use too. They are definitely worth a look if you are planning some domestic travel in India.