- January 11, 2017
The route between Mumbai and Goa is extremely competitive with Air India, GoAir, Spicejet, Vistara and Jet Airways all flying the route. Most operate either the A320 or B737 for this flight which is usually under an hour in duration. On my trip to India I decided to use Etihad miles to book this flight as I found the prices pretty high on the day I planned to travel. I wanted to have a sample of Jet's business class so paid the extra miles to fly in the 'Premiere' cabin, even though it really is a bit of a waste on such a short sector.

I arrived at the huge and ultra modern looking Mumbai airport with about 90 mins to go before departure:


There are loads of desks for Jet Airways and it was a little bit hard to find the right one, eventually I found a business class check-in zone that seemed to be shared by both international and domestic flights: 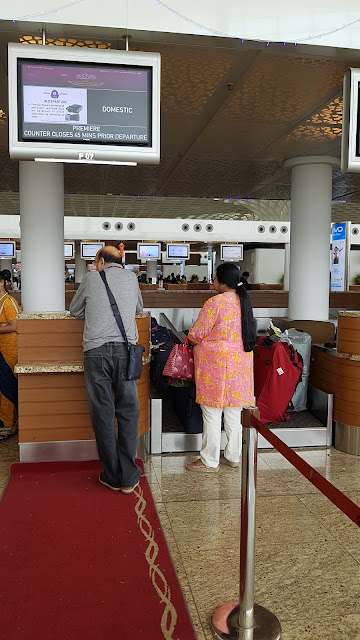 There seemed to be some confusion about the ticket, I was asked whether I had used miles to 'upgrade', which I had not, I had used miles to buy the ticket outright. It seemed to take a LONG time to process this simple checkin, but eventually my bags were tagged and boarding passes handed over for row 1. Then it was onto the domestic departures zone. 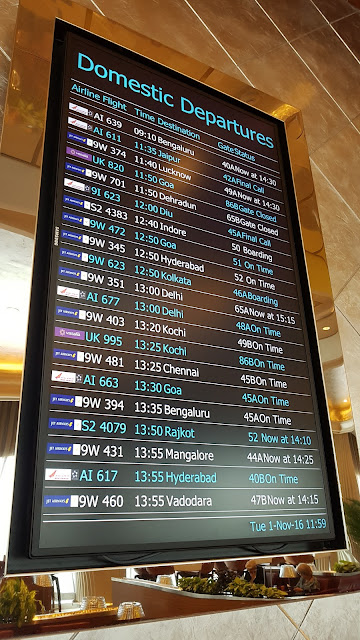 I went to the lounge where I was again questioned about my ticket, had I used miles to upgrade? There seemed to be some discussion going on about whether I was entitled to use the lounge. Considering I was an Etihad gold on a business class ticket I didn't think there should be a problem. Eventually after a phone call was made I was finally allowed in. I was not feeling particularly welcome with all the questioning though.

There was a good selection of food on the buffet but alcohol had to be purchased which was disappointing! I felt like a beer so I went to the bar and ordered a couple of Kingfishers. 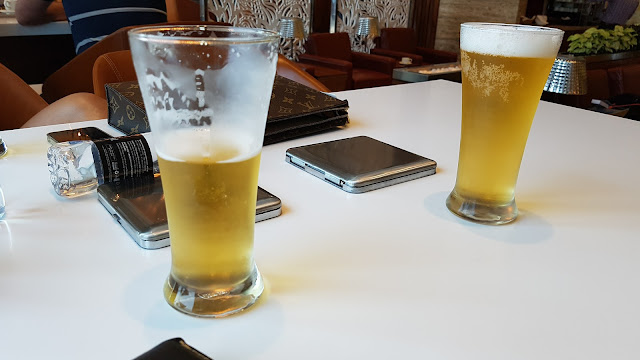 There are no boarding calls so with plenty of time to go I headed to gate 51 for departure: 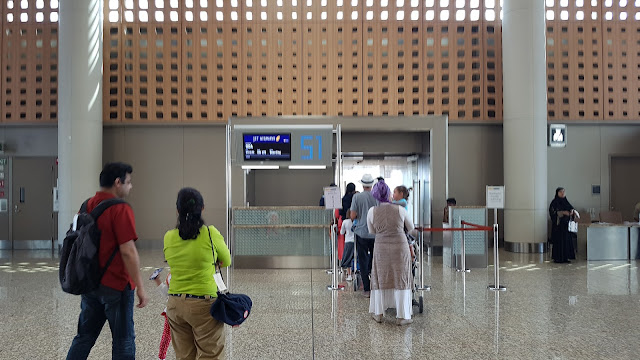 Upon entering the aircraft I was welcomed on board and directed towards row 1. The cabin is fitted with 12 business class seats in the standard 2x2 arrangement. They are in a blue leather design and quite comfortable with a leg rest included also.  I didn't notice any inflight entertainment system but apparently according to the website they have a BYO device wireless system on the B737 fleet. I used my own tablet with my own videos for this sector.


Welcome drinks were offered, but they came in paper cups! Disappointing 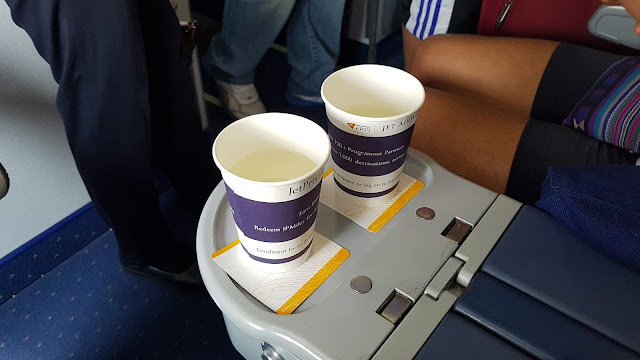 Menu's were also provided and I was astounded at how extensive it was, considering the flight time was announced at 50 minutes! 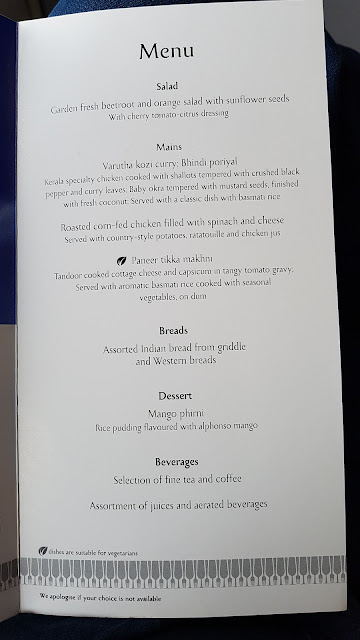 It was soon time for departure and we pushed back and headed for the runway. I spotted an IndiGo A320neo waiting at the holding point. I wonder when I will finally fly on one? 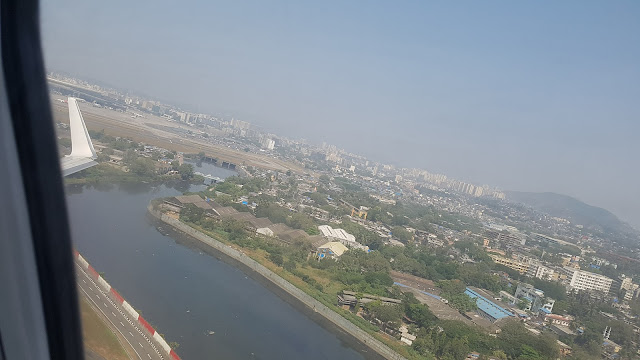 It was a clear afternoon so the seatbelt sign was turned off pretty quickly and then it was time for lunch. Alcohol was not available on this flight so I ordered a coke. It again came in a paper cup which seems strange for business class. I don't know if this is normal or if they just forgot to load the glasses.

The meals were quite large and perfectly enjoyable. I was quite amazed to have so much food in front of me for such a short sector. There wasn't a lot of time to enjoy it, you needed to eat within about 15 minutes before it was time to prepare for landing in Goa. The flight attendant was very friendly and provided good service to a full cabin. 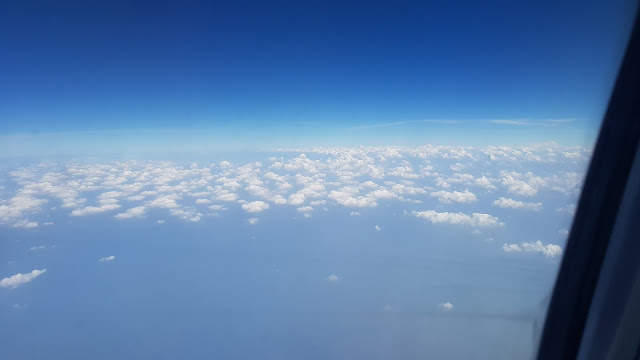 I managed a cup of tea on the descent though, along with a quick lavatory stop: 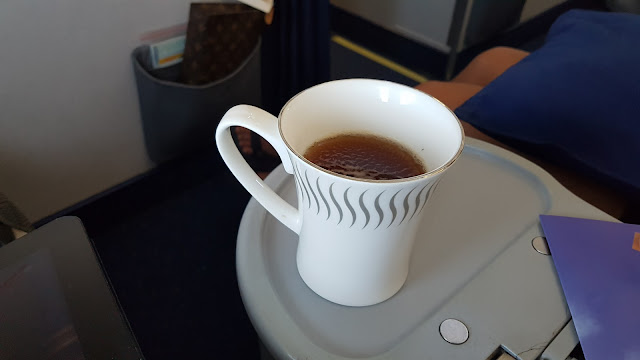 We made our approach out over the ocean and landed in Goa, in what I would consider pretty poor visibility. 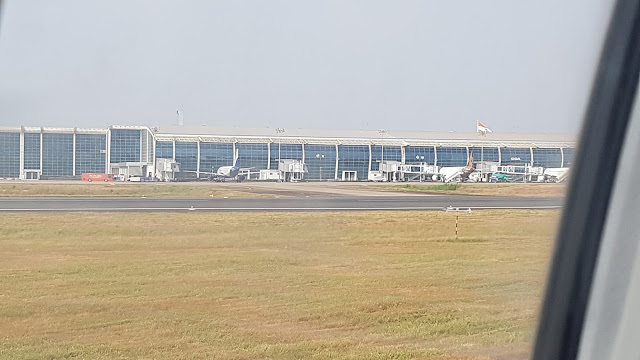 We parked at a jetway so avoided the need for buses, and we were soon in the baggage claim area.

With my bag safely arrived it was out into the arrivals area to find the bus for the Park Hyatt. It was the usual chaotic Indian scene outside: 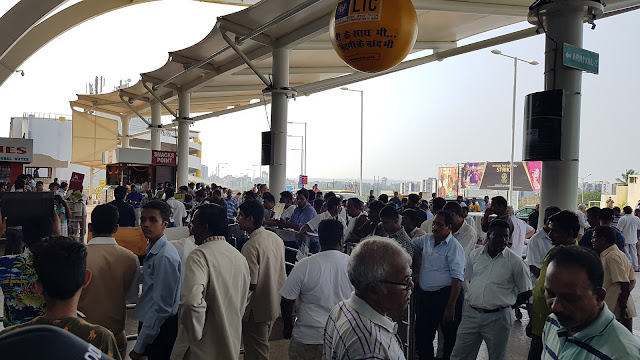 Overall a good experience on this flight. The aircraft was new, clean and tidy with good leg room in the business cabin. The catering was also excellent for a flight of this length. Just a couple of disappointments, the length of time it took to process the checkin firstly. Then the constant questioning about whether I had used miles to upgrade and the difficulty in accessing the lounge made me feel quite unwelcome. Other than that I have no complaints and would happily use Jet again on flights around India!
Boeing 737 business class Jet Airways trip report