- November 01, 2009
The next leg of my journey was to be on an Airbus A320 from United Airlines, Los Angeles to Las Vegas. After clearing customs and leaving my checked bag I made my way back up to the departures level at LAX Terminal 7. Already having my boarding pass I joined the TSA security queue, I did not realise that Star Gold with United could go through the elite security line so I joined the first queue I saw. A security person noticed me clutching my gold boarding pass and took me out of the line to the express lane, how fantastic! After the usual shoes off security check I roamed around the terminal and decided on some McDonalds for breakfast, knowing that the lounges in the USA have very little food other than cheese and crackers! 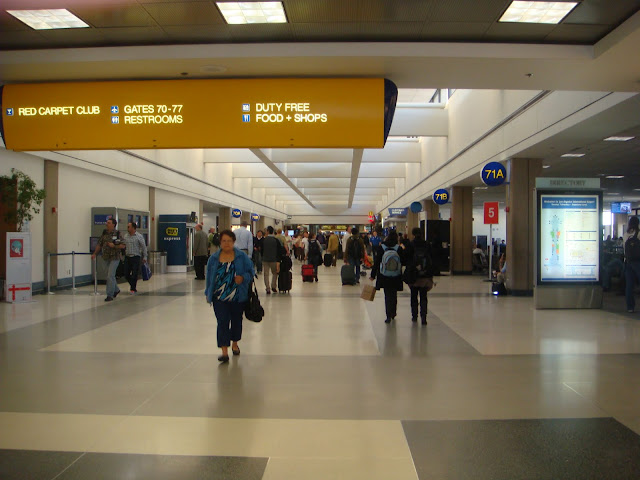 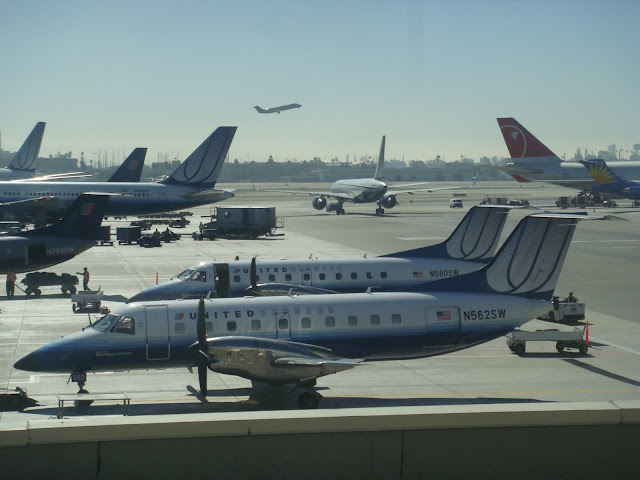 View of the apron, several Embraer 120 Brasilia's at the front 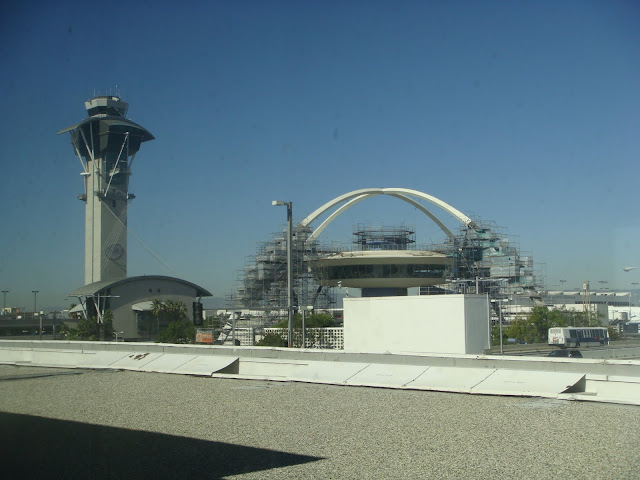 LAX icon - seems some work is under way!
I went and visited the United Red Carpet Club at Terminal 7 - the staff there had no issue with my bmi Diamond Club card thankfully! The inside was fairly basic and had a selection of fruit, cheeses and crackers and snack mix type things. The drink station is very basic with tea, coffee, water, juice. If you want alcohol there is a bar, with a barman, however when flying domestic you do not get any drinks for free with a Star Alliance gold card. I had a coffee and that was about it. The toilets were not particularly clean or nice, and there was not much of a view as the windows had screens on them.
I asked the attendant about wi-fi and she said I would have to pay for it so I didn't bother! I feel sorry for Americans, the lounges here are just awful. Anyway, it was soon time to head to the gate and continue my journey to Las Vegas, at this point I had been going for about 22 or 23 hours since I left home, and I was feeling weary! 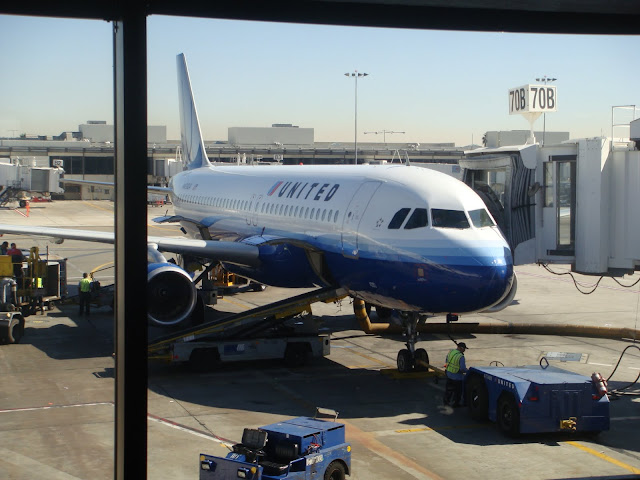 United A320 - preparing for my flight to Las Vegas
The gate area was quite busy and the flight information displays showed that both United First and United Economy had checked in full, and the flight was in fact oversold. They were calling for volunteers to go on the next United flight, which was almost 4 hours away. I contemplated seeing what compensation was on offer but then decided 4 hours was too long when I was only here for 4 nights. 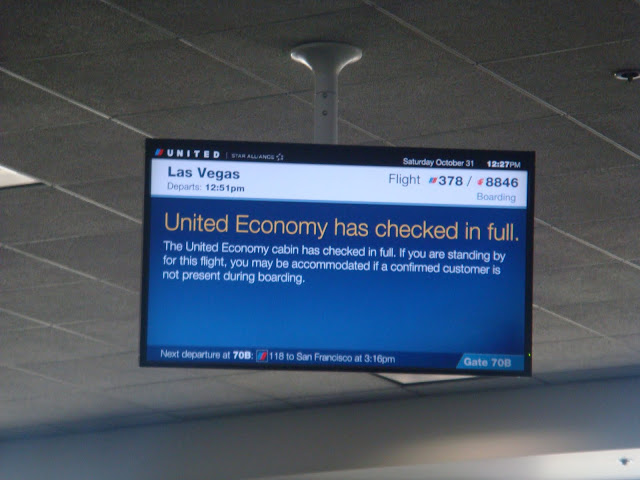 Full flight
Boarding was called and I took advantage of Star Gold priority boarding and took my seat in 23F. Sadly, no upgrade to First, and no upgrade even to economy plus! Oh well! 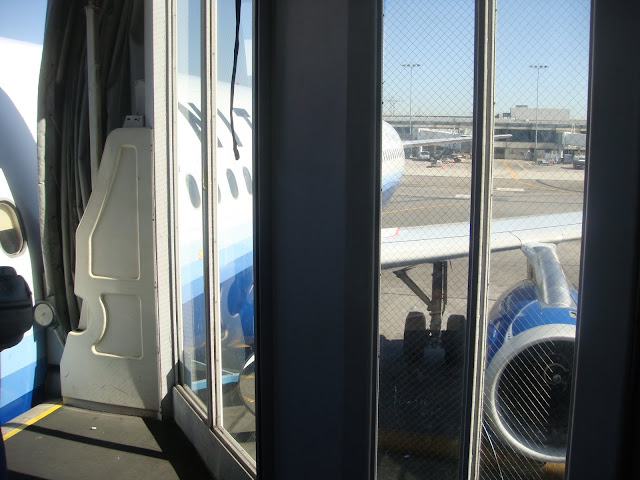 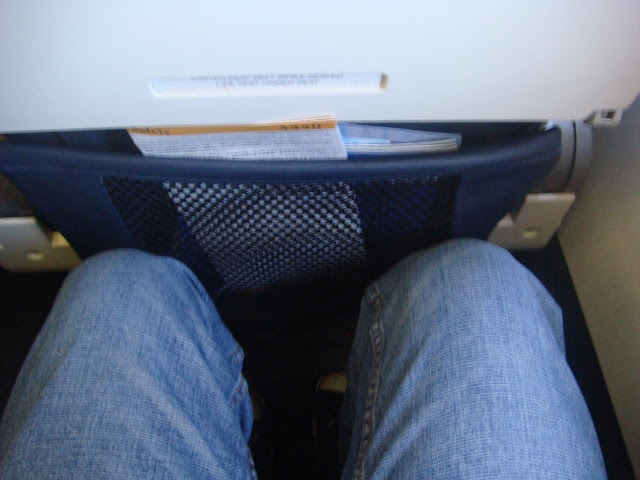 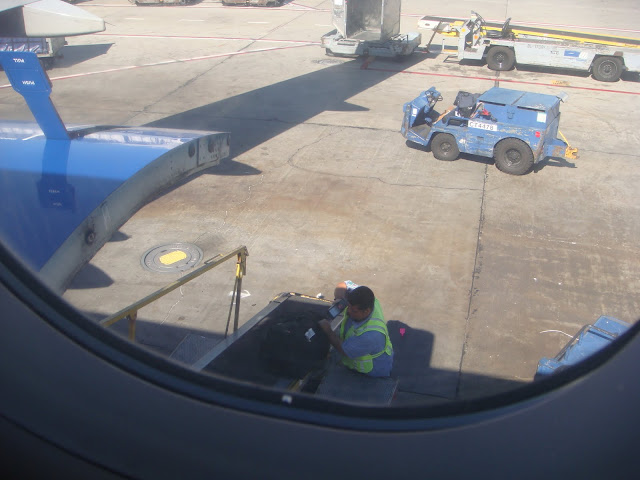 ground crew at work, scanning barcodes as they load, never seen that before myself
The ground crew came on board during the boarding process to announce they needed one more volunteer to take the later flight so as not to split up a couple that were travelling together. Initially a $200 voucher was offered, it was then upped to $300 and finally $400 when someone took it. I must say I was very very tempted at this point!!  After all that, the poor lady that was going to be split up from her partner came on board and she had been crying, poor thing getting so upset about it, I felt sorry for her.... the crew were great with her when they noticed and cheered her right up!
As soon as that was all done with doors were closed and we pushed back. The captain announced a flight time of 44 minutes. He did not specify whether 'Channel 9' the Air Traffic Control feed audio entertainment would be on or not, I hoped it would, and tuned to it with my headsets but sadly it was off and remained off throughout the flight. 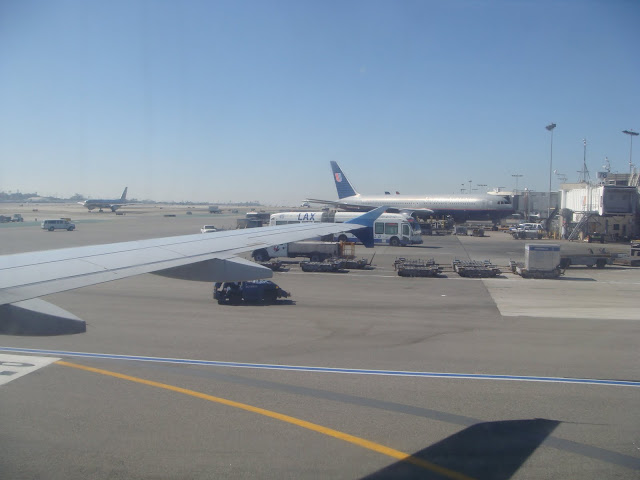 Pushback complete and ready to go, a United 767 going to I think it was Washington-Dulles is parked at the gate nearby 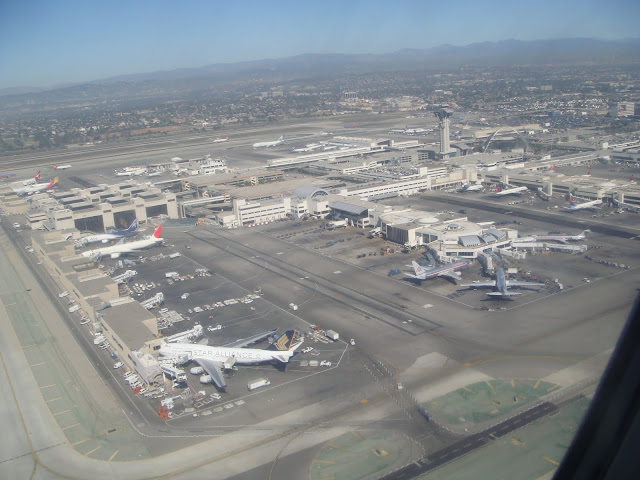 climbing out we spot a Singapore 747! Nice! 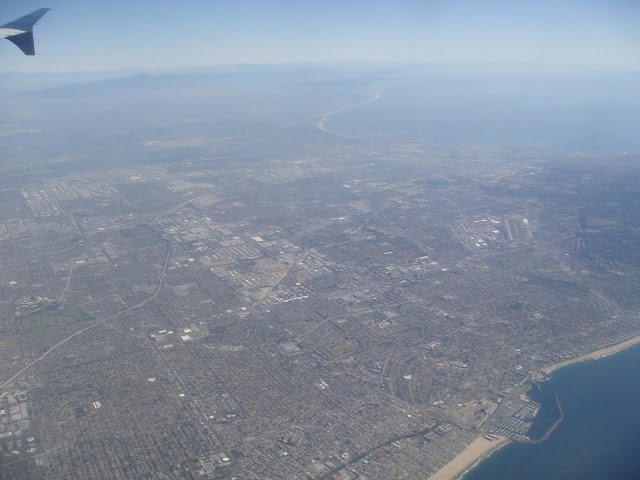 departure out over the ocean to the west, then we turn around and head inland, here we have turned and are now heading eastbound 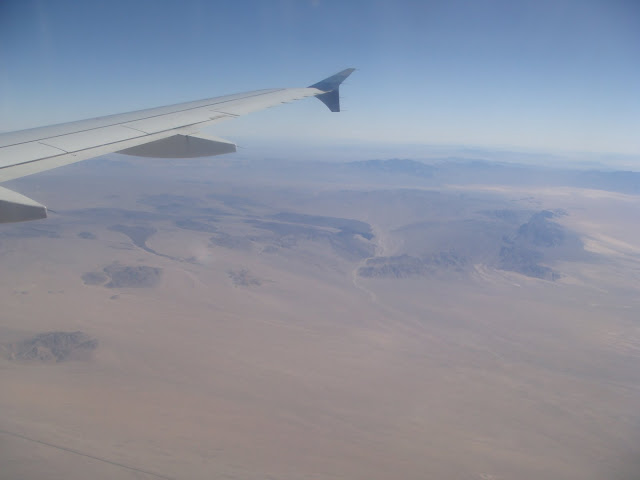 nothing but sand after you leave the L.A area until you hit Vegas
Onboard service in economy consisted of a drink only. I had a coke. Drinks are free, any food items you might want you must pay for. We went up to 29,000 ft, and before you knew it we were descending again. Landing was routine and we parked next to a United 757. I had finally arrived at today's destination. This last flight was short but pleasant enough, no complaints really! 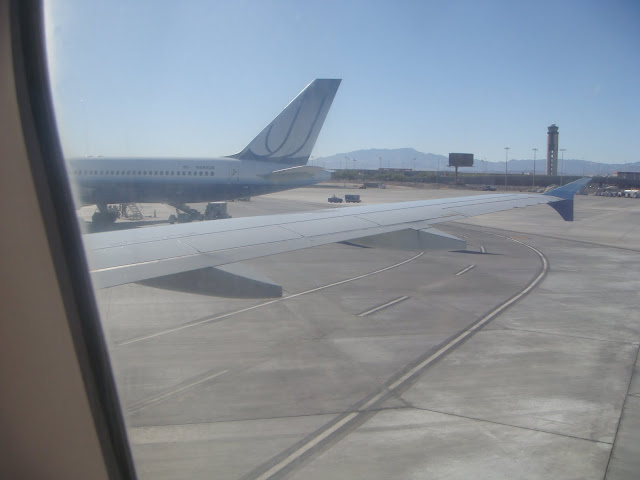 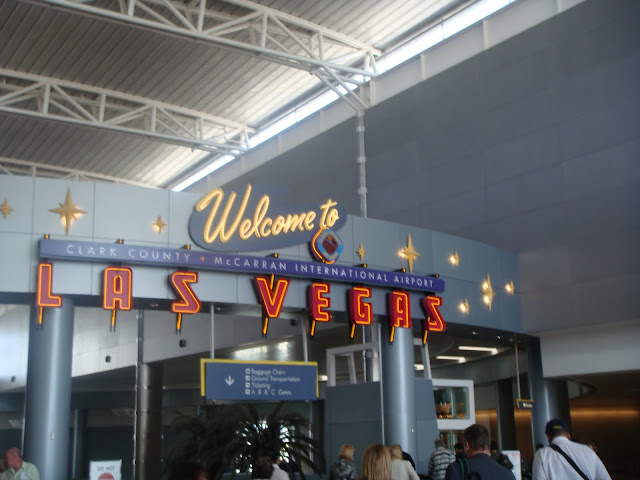 arriving in the terminal, United use the remote terminal, accessed by underground train.
Airbus A320 trip report UA378 United USA