- December 09, 2015
After a pleasant stay in The Private Room at Changi, I headed to the gate for SQ2 to San Francisco via Hong Kong. I was taking only the first leg today, but since this is a long haul flight the latest generation 2013 product is offered on board. Today's flight was operated by Boeing 777-300 ER 9V-SWW, delivered to Singapore Airlines in March 2014 which made her 20 months old at the time of this flight.


Boarding was called a few moments after I cleared security and I was given the usual warm greeting as I presented my boarding pass for 1F. I was escorted to my seat and was soon joined by 5 other passengers, making the load 6 from 8 for today.


The seats are a nice upgrade from the older product. They are semi private suites designed in conjunction with BMW. All are a nice dark brown leather with matching leather covered cushion. The entertainment screens are a higher resolution and larger than the previous product and the overall look and feel is just more modern.


I enjoyed a glass of Krug pre takeoff and the crew confirmed my book the cook order for dinner of Roast Rack of Lamb. I was also asked for my after takeoff drink order, I decided to have a Singapore Sling. At 6.30pm, right on schedule, we pushed back and made a smooth takeoff in the fading light.

Moments after the seat belt sign was turned off my drink was presented, along with a small bowl of nuts. 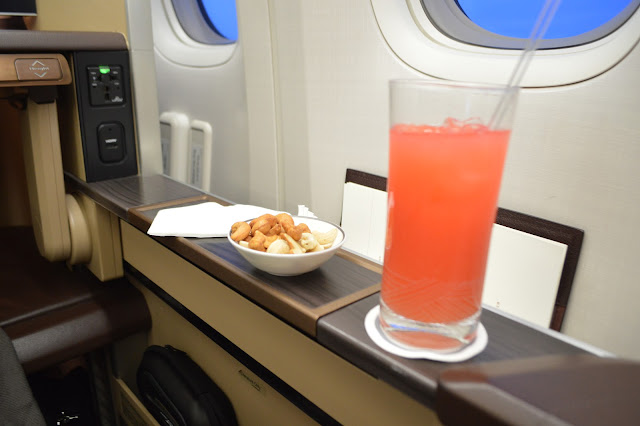 Here is the dinner menu for the Singapore to Hong Kong sector: 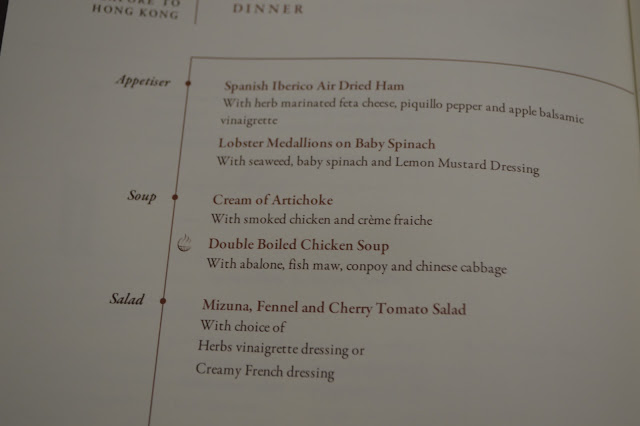 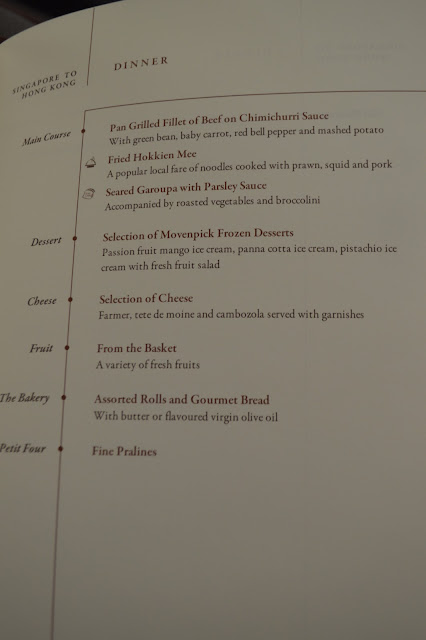 Since I am not a big seafood lover I decided to start with the ham, with a glass of white wine. The ham was great, it went beautifully with the feta. 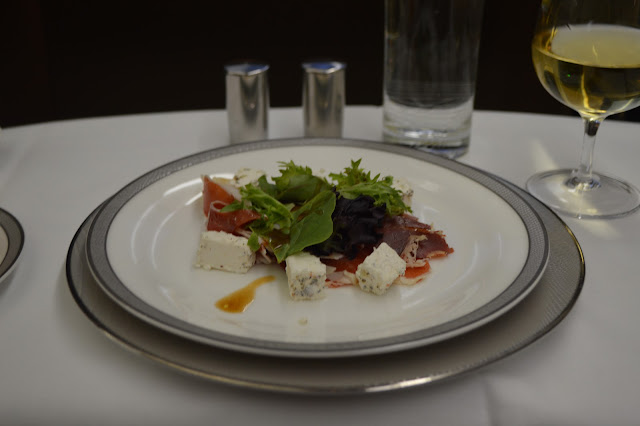 There was 2 choices of soup, I went with the cream of artichoke and I was not disappointed. It was lovely and creamy and had some nice chunks of chicken and a dollop of creme fraiche in the centre. Delicious. 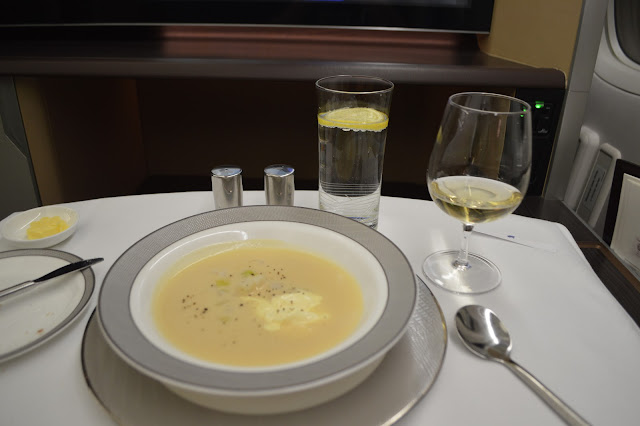 This was followed by a salad with choice of dressing, this was nothing special and I didn't bother finishing it. 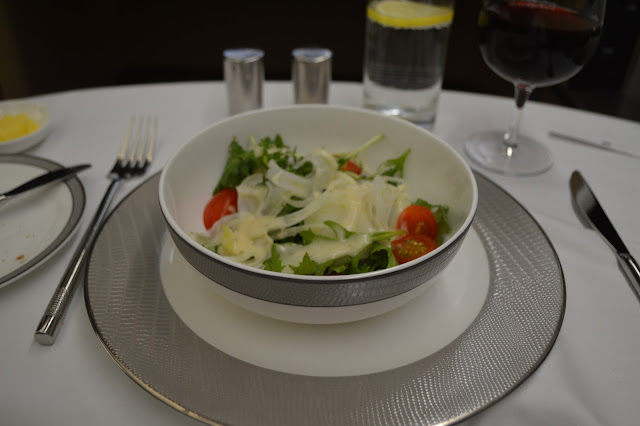 Next up, the main course! My pre-ordered book the cook rack of lamb. I switched to one of the red wines at this point. The lamb looked absolutely beautiful on the plate and was nice and pink inside. I was very impressed, and so full by this point! I couldn't actually finish it all so I sent it back not fully eaten. When the inflight supervisor noticed this he approached me deeply concerned that the meal was not to my satisfaction. I assured him the meal was great, I just didn't have enough of an appetite! 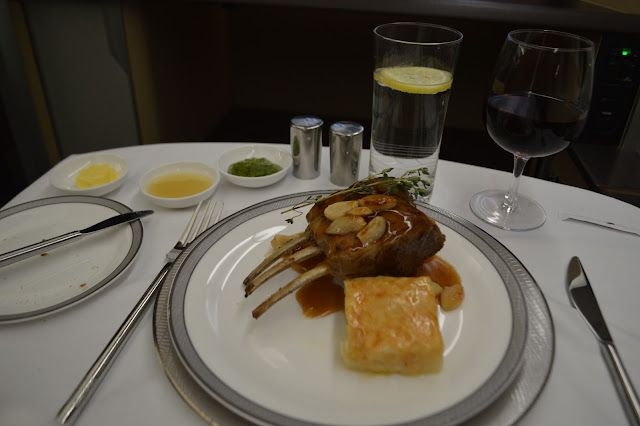 Next was dessert, a selection of Movenpick ice creams, served with fruit. Again, totally delicious and a great end to my meal. 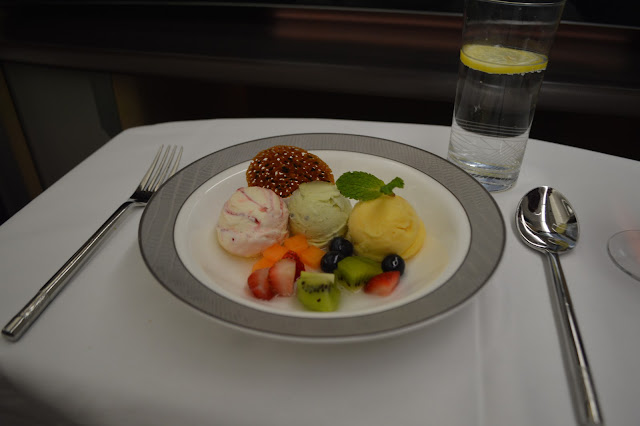 The cheese course was then offered but I simply couldn't do it. Just too full. Instead I reclined my seat and watched TV until landing in Hong Kong. The crew were not quite as attentive as on the previous sector on Melbourne, but that would be due to the fact there was twice as many passengers on this flight. I can't fault them though, they were wonderful and I was treated like royalty.

I don't have any photos of the seat in bed mode because on this flight I didn't sleep, its only 3.5 hours so there was no need. Overall I was impressed with the new seat design but I still don't find it particularly comfortable in seat mode, it is very wide and flat and doesn't really have much support. It does have more privacy and much better controls and a better entertainment screen than it's predecessor.

We landed in Hong Kong on schedule at 10.15pm and I was soon making my way to immigration. There was no special ground arrangements for First passengers, it was go your own way which was fine by me. It wasn't too long before I was through the queues and making my way to my hotel for the night. Next report is Cathay business class back to Singapore.
Boeing 777 First Class singapore airlines trip report